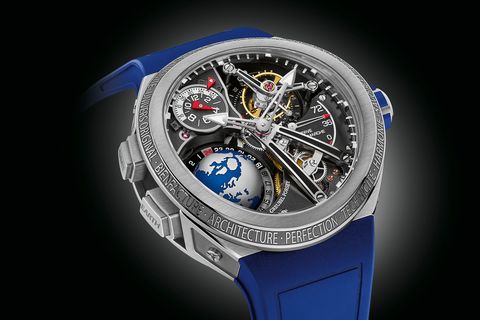 Depending on your perspective, the emergence of this, the Greubel Forsey GMT Sport is either totally unexpected or extremely predictable. Greubel Forsey, that most haute of haute horlogers is not as wedded to the traditional aesthetic as, say Roger Smith or Frodsham, but then again neither is it often considered the natural competition for Richard Mille. Consider that it's most recent release, we hailed as the most artisanal watch made this side of the advent of electricity. With this watch, it takes a step in Mille's direction.

The GMT Sport is described as the logical successor to the 2015 Greubel Forsey GMT Black, but it really is its own thing. The GMT Black did introduce a note of sleek menace to the brand, but kept the case shape and dial layout familiar from previous watches. The standout feature of the GMT Sport is a radical new case design with integrated lugs and a rubber strap (aha, it's a distant ripple of the Sports-Luxe wave, washing up on Greubel Forsey's remote and isolated shores).

The titanium case pulls something of a tromp l'oeil; viewed from dead ahead, it appears round, but is in fact a pronounced ovoid, dropping down towards the strap with a curved profile that hugs the wrist. The sapphire crystal is a sophisticated shape that recalls the double-curve of the crystal on Audemars Piguet's Code 11.59, and the caseband, pushers and crown, with their emphasis on oversized forms, thick, geometric indentations and contrasting finishes, are firmly in Richard Mille territory.

Curved cases are in themselves not a new thought to enter the watchmaking consciousness; think of the Cartier Tank Cintrée and various Vacheron Constantin and Patek Philippe creations of the 1930s, 40s and 50s, right up to the likes of Laurent Ferrier's Bridge One and the aforementioned RM11. Nor are they exclusively the preserve of high-end watchmaking; unflattering though it may be in many ways, the watch that came to mind when considering the extent of the GMT Sport's curve and the profile of the case as it flows into the strap, was the Bulova Curv from a few years ago.

Not that I'm drawing any unwanted parallels between Greubel Forsey and Bulova; the GMT Sport is quite a different proposition from any of the above, and unmistakably a GF in execution. It retains the dial-side hallmarks of the brand (including the lack of a conventional dial), such as the rotating Earth for the GMT function, the (twice patented) second timezone indicator with its squat red arrow, and the inclined 24-second tourbillon. It also retains Greubel Forsey's habit of inscribing a series of 'brand values' somewhere on the watch; in this case, on that wavy bezel (as well as on the underside of the rubber strap). This has always seemed an acquired taste.

There's no doubt that those same values have been deployed, however, particularly in modifying the GMT Sport's movement to take to this curved shape. The gear train is visibly inclined, following the path of a new curved bridge (which which Max Busser would be familiar) that supports the hour and minute hands, which are themselves curved to fit under the sapphire. These hands, in another faint nod to the notion of sports, now have tips filled with Super-Luminova.

As is often the case with Greubel Forsey, the front of the watch reveals most of the movement, while the back is given over to its spiral-shaped worldtime reference chart, which aids the setting and adjusting of the rotating globe, complete with offsets for daylight savings time.

The idea of a "sporty" Greubel Forsey is an odd one, but perhaps no odder than our continued and convention-driven use of the phrase "sports watch" in any context. This is a series of eleven highly expensive, highly engineered luxury watches, and I can't see a lot wrong with combining those attributes with a greater sense of ergonomics. Whether it is inherently beautiful is a subjective view (and one I'll refrain from making until seeing it up close) but I have to say it could have been interesting to see if the diameter could have been brought below 45mm - however, finding space for this much horological heft is never easy.