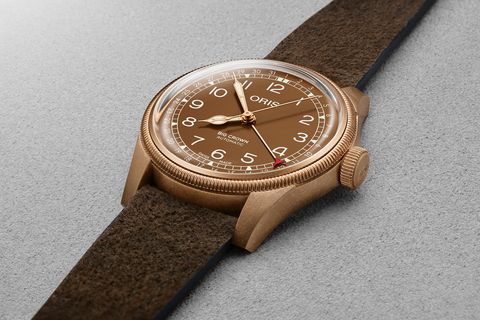 If it works, why mess with it? That is clearly the current thinking at Oris, which, having seen the retro-inspired, well-priced Diver's Sixty-Five become a huge hit, is looking to work the same magic with the Big Crown Pointer Date.

The retro-inspired, well-priced (you get the idea) Big Crown Pointer Date has been the somewhat unexpected focus from Oris of late: since the 80th anniversary piece produced in 2018, the number of variations has proliferated to include bi-metal designs as well as dials in slate grey, red, blue and a sort of 'hospital corridor' green that works rather well with a bronze case. The Big Crown Pointer Date was also the model used for this year's Movember edition. It's a very similar process to that followed by the Diver's Sixty-Five: find a good idea and iterate the hell out of it. The skill is in providing enough choice for everyone without diluting the appeal that made it a good idea in the first place; so far, so good.

This principle is what brings us the latest Big Crown Pointer Date in bronze - this time, with a bronze dial to match the 40mm case. Oris says that the solid bronze dials will be chemically treated and coated with a transparent lacquer (onto which is printed the dial markings) so that, unlike the images seen here, each dial will in fact have a unique texture - a little bit of wabi-sabi to liven things up.

The case itself is all bronze save for the caseback, which is stainless steel - pretty standard form to avoid unappealing green smears on your wrist as the patinated bronze does its thing. The watch has a display caseback (in mineral glass as opposed to sapphire; one way Oris keeps costs relatively low) through which you can see Oris calibre 754, a Sellita SW200-1 based movement equipped with a proprietary rotor design and modified to take the Big Crown Pointer Date's signature complication, the crescent-tipped central date hand. The power reserve is 38 hours.

The Big Crown Pointer Date is an interesting case study, in some ways. For all that the commercial strategy clearly mimics that of Diver's Sixty-Five, the crucial difference is that rather than a dive watch, this is pretty much everyone's idea of a simple, round watch that just tells the time and date: not a category of watches that many brands are rushing to sell right now. It may sit in Oris's aviation category because of its heritage, but there's nothing particularly pilot-focussed about the design today; those who aren't so familiar with the brand might confess to being confused by the name; the crown isn't even that big.

No, the watch's size, cathedral hands and knowingly unusual date indicator, together with Oris's focus on materials and colours rather than specifications and technical improvements tell a story that's more about buying into a 1940s aesthetic than a tool watch ideal. See also the strap, which is a soft chamois leather. None of this is a bad thing - there are plenty of functional tool-watch pilot's pieces out there, including those from Oris itself. What's interesting is to see that with the right approach, Oris is succeeding with a style of watch that many others are neglecting.