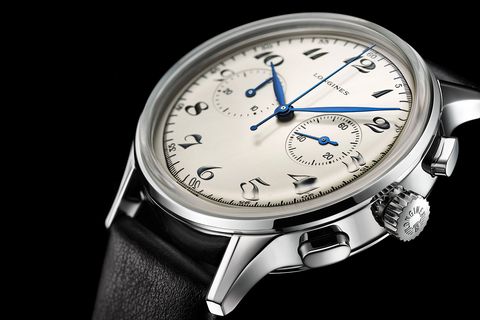 Given Longines legendary historic reputation for chronographs (first wristwatch chronograph, first patented flyback etc) it’s perhaps surprising that just six of its always compelling, back catalogue-dipping Heritage collection are currently chronos. There have been plenty of chronograph reissues in the recent past, but some of these models don’t hang around long at Longines (we're looking at you Heritage Diver 60s and 70s - or rather we're looking for you).

That year puts the original piece, a manual wind stainless steel chronograph, smack-bang in the middle of what is widely considered to be the golden age of watch design and with even the most cursory glance at its dial, it’s easy to see why Longines selected the model for rebirth given the perfect sense of proportion, clean uncluttered layout, near monochrome colour palette, heavily stylised Breguet numerals and subtly recessed sub-dials. It’s a watch that looks every bit as sophisticated in the 21st century as it did midway through the 20th.

The original chronograph from 1946
Longines

Longines has been suitably sympathetic with the reissue, as you would hope, although small tweaks have been made. The hour hand has been changed, with the original ‘Modern’ style hand making way for a blued steel ‘feuille' or 'leaf’ hand to match the minute hand. Ironically the ‘Modern’ hand was one of the few elements of the watch that served to pin it to an era; the choice of leaf hand makes for a more timeless, and inevitably slightly more anonymous design.

Less satisfying is the motive for transposing the chronograph minutes register and running seconds sub-dial at their three and nine o’clock positions. The automatic 28,800vph L895.5 chronograph movement comes courtesy of ETA as an exclusive for the brand. But that doesn’t mean it was designed specifically for the 1946; rather it’s an upgraded A31.L21, a pairing of the ETA 2892 automatic calibre and a Dubois-Depraz chronograph module, offering 54 hours rather than the standard 48 hours of power reserve. As such, and aside from major reworking, the original configuration was unobtainable.

We haven’t had our hands - or measurement callipers - on the original piece, which is on display in the brand’s incredibly comprehensive museum in Saint Imier, but we know that it made use of Longines legendary 13ZN movement, the first serially-produced flyback chronograph. Given that movement’s relatively large 29mm diameter, we can assume the watch was on the large size for the period, perhaps 36-38mm. The new case is 40mm, so likely little change there. The new watch isn't a flyback, but a standard chronograph.

One of the most common failings of heritage reissue watches from all brands who dip their toes in these waters is the ill-fitting size of the company logo on the dial. Often the modern (and utterly immodest) requirement that brand logos be visible on the dial from the other side of the road is applied to historic designs and, from a purely typographical perspective, it simply doesn’t work. So full credit to Longines for getting this aspect right each and every time within its Heritage collection.

The only thing that’s missing as far as we’re concerned is the original movement. Yes, Longines is a different brand today to the one that created the integrated, manually wound 13ZN flyback chronograph movement in 1936 (or its rattrapante and minute repeater housing pocket watches for that matter) and recreating such a movement would mean a finished product with a price tag that would likely baffle Longines' current customers, but we won’t stop hankering for one.