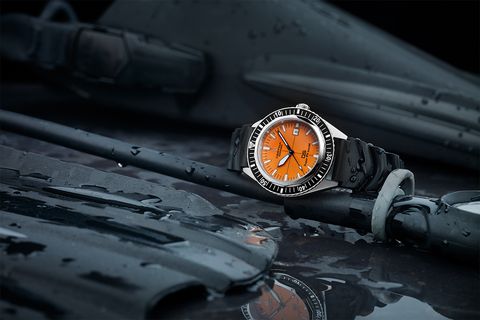 One of the most satisfying hits of the last couple of years has been the Certina DS PH200M, a vintage diver reissue from the 60s. The watch was rugged, handsome, powered by the proven Powermatic 80 movement and priced to sell.

Although a diver, it’s the kind of watch a modern-day Indiana Jones might wear, but what was so satisfying about the positive reception it received was that it came almost out of nowhere. Certina (the present day incarnation of the brand at least) hasn't been known for this kind of watch; it tends to be a brand of super precise, well-made quartz chronographs, usually given a fleck of youthful neon colour to appeal to a sporty consumer.

But that all seemed to change in 2018 when modern Certina, no doubt interested in the very profitable demand for heritage reissues, began channelling the Certina of yesteryear, which in the 1960s and 70s was a brand with real diving chops thanks to its proprietary DS, or Double Security, case construction. The Double Security label has altered its meaning over the years, but it originally referred to an extra layer of shock-proofing in the form of an elastic ring around the movement. The brand was also known for its reinforced casebacks and extra-thick plexiglass.

The inspiration for Certina’s follow-up act, the DS Super PH500M, took centre stage in one of the most ambitious underwater experiments ever attempted, Tektite I, when in 1969 NASA observed a team of four US Department of the Interior scientists as they spent two months living in an underwater habitat built by General Electric, in order to investigate the long-term effects of saturation diving on human physiology.

Each member of the crew wore a brand new Certina DS-2 Super PH500M on their wrist for the duration of the experiment, which performed faultlessly. The same watches would go on to be used in the Tektite 2 the following year and there is even some (unverified) suggestion that Certina supplied watches to the US Navy’s earlier SEALAB II mission.

The DS Super PH500M of 2020 occupies the same 43mm footprint and 500m water resistance as its predecessor, which points to its genuine tool watch credentials, and the same faceted aluminium push-to-turn, unidirectional bezel, a safety feature designed to prevent the bezel being turned accidentally.

As you might expect, the original 25-651 movement is long gone, replaced by Swatch Group’s rather brilliant Powermatic 80 automatic movement with its anti-magnetic Nivachron hairspring and extremely practical 80 hours of power reserve. But the most obvious change is the vivid orange dial (reminiscent of Seiko, especially when paired with a black rubber concertina strap), the original watch featured a black dial with the minute hand picked out in orange. The rectangular tip of the seconds hand has gone too, replaced by an arrowhead.

Neither of these decisions were arbitrary, instead made to improve legibility after working closely with Germany’s VDST Association of sports divers, which boasts nearly 84,000 members and whose logo can be found stamped into the caseback.

Rather than raiding the archives and banging out another heritage facsimile, Certina has taken the more interesting position of pitching the DS Super PH500M as a direct continuation of its predecessor, an improved, updated reference they want you to get wet rather than another fawning replica.