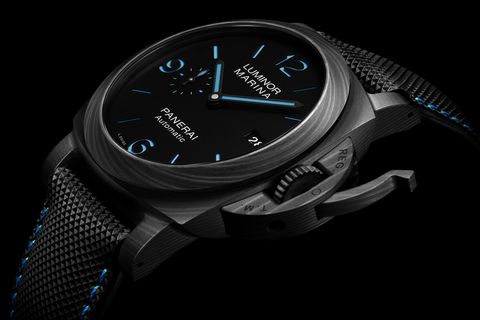 Panerai has announced details of its first new watch of 2020, the Luminor Marina Carbotech 44mm, aka reference PAM01661. It sees the return of the brand's proprietary high-tech carbon fibre composite, first launched in 2015, and pairs it for the first time with its signature 'sandwich' dial construction.

The watch is the sixth regular model to use Carbotech in its case construction, in addition to the ambitious Lab-ID concept from 2017. Akin to the forged carbon used originally by Audemars Piguet in the Royal Oak Offshore back in 2010, and ever more widely since, it consists of layered sheets of carbon fibre bound together with polyether ether ketone (PEEK), a colourless polymer. The structure of the material yields the organic appearance seen here, as the case is milled from a solid block of Carbotech to reveal the layers, before being polished to a smooth finish. The caseback is made from titanium.

Aside from its juxtaposition with the Carbotech case, there is nothing new about Panerai's employment of the sandwich dial construction - a method of delivering improved luminous performance by sandwiching an entire layer of Super-Luminova between two dial layers - save for the colour. It is the first Luminor Marina to use blue lume, and brings the design closer in line to that of the Submersible range, which was spun off from the Luminor family as a collection in its own right in 2019. It could also, perhaps, be seen as evidence of the subliminal influence of George Bamford... The watch also comes on a black textile strap with contrast blue stitching.

Panerai has said that this watch kicks off a year-long reorganisation of the Luminor family. Little else is known at this point; following on from the decision to establish the Submersible as its own entity, it makes sense that the Luminor would get a little attention, if only to further highlight the distinction between Panerai's most dive-focussed range and its most iconic.

Related Story
Behind the scenes at Panerai's new manufacture

Thanks to the Carbotech case, PAM01661 weighs "just" 96 grams - roughly double what the lightest carbon-cased watches clock in at, but this is still a 44mm watch with Panerai's usual copious proportions, as well as a twin-barrel movement inside - the in-house P.9010 calibre. That provides three days of power, and as usual for the Luminor family, the watch is water resistant to 300m.