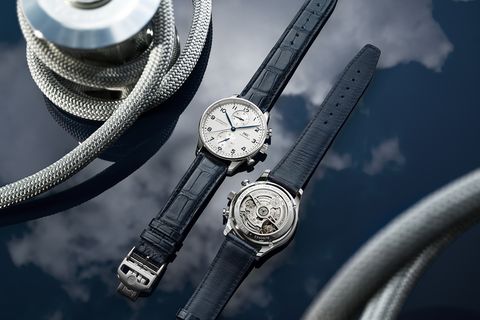 The Portugieser Chronograph has been a two-tier watch since IWC introduced in-house movements to the mix in 2017, specifically a version of the 89000 calibre family, a movement often found at the heart of IWC’s more complicated pieces.

Before this point, the Portugieser (or Portuguese as it was then known) Chronograph collection relied on third party movements from ETA and later Sellita, which it would then upgrade, tweak and finish as necessary.

It is also worth noting that between its introduction in 1939 and the early 1990s, the Portugieser was a time-only watch, the Portugieser Chronograph being an entirely modern creation, launched in 1998, a simplification of the 1995 Portugieser Split Second launched using Richard Habring's DoppelChronograph movement (a mechanism which lives on not only at IWC but now also at Habring's eponymous brand, which you can read about here).

But IWC’s gradual move towards in-house watchmaking meant that situation was unlikely to last much longer and sure enough, the following year IWC offered the first clue of what the model’s future held when the brand celebrated its 150th anniversary with a raft of commemorative special editions including the Portugieser Chronograph Edition 150 Years, which is powered by an in-house 69355 calibre. IWC’s 69000 family of 28,800vph chronograph calibres were already hard at work powering chronos in its Ingenuier and Pilot’s Watch collections.

Now IWC has called time on third party movements entirely by reintroducing us to the 69355 calibre and deciding that this watershed moment is significant enough to retire the 3714 reference number altogether, replacing it with ref. 3716.

IWC first launched the 3714 in 1998 and the model has remained almost completely unchanged since then, no mean feat when you consider that, until recently, IWC overhauled one of its collections every year.

The 69355 is considered in-house because it is manufactured from the ground up, but it is in fact similar in architecture to both the now defunct 75320 (which was an upgraded and modified ETA 7750) and 79320 (which used Sellita’s SW500-1 as a base, itself is a carbon copy of the 7750). If nothing else this points to how much IWC's current success owes to ETA’s fabled 7750 (not forgetting Messrs Blümlein, Klaus and Habring of course).

The 69000 calibre normally features three sub dials in a 6/9/12 configuration displaying running seconds, chronograph hours and chronograph minutes respectively. Preserving the symmetry that the Portugieser Chronograph has always been known for, the 3716 opts to omit the hour counter.

While the reference number may have changed to reflect the use of an in-house movement both 3714 and 3716 references are identical on the outside, so it's worth double-checking should you be in the market for one.

While this in-house movement update sounds the death knell of the 3714 (a watch we ranked as one of the best chronographs on the market here) reference number, the news is not as drastic as one might first suspect as the new 3716 continues the Portugieser Chronograph’s unbroken run as the aesthetic bedrock of IWC’s entire collection.