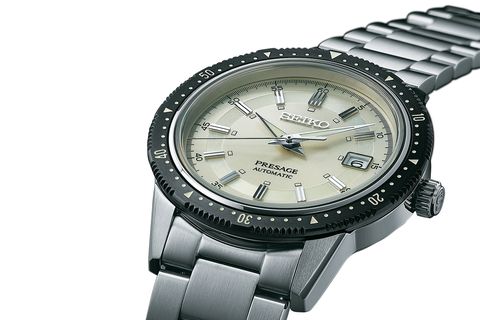 Seiko has announced details of three new Presage models inspired by a watch from its long and proud history: the 1964 Crown Chronograph. In what is surely a first for watchmaking, however, the modern-day models are not chronographs themselves. What's going on here?

The Crown Chronograph was Seiko's first watch with a stopwatch function: it was released in 1964 to tie in with Tokyo's first hosting of the Olympic Games, for which Seiko had been commissioned to provide timing equipment and watches. With Tokyo 2020 just around the corner (coronavirus permitting), this would seem like an auspicious opportunity to remind the world of this corporate milestone.

Instead, we have three time-only models that draw on the 1964 Chrown chrono for their overall aesthetic. Seiko describes the original, a column-wheel equipped one-minute timer controlled by a single pusher, as "a legendary timepiece that exudes Seiko’s uncompromising manufacturing ability". The new models, we are told, reproduce its design "as faithfully as possible".

They do look extremely similar to the 1964 watch: there is the black bezel with minute markings, the finely ridged hour markers, the arrow-sharp hands and the slightly pie-pan dial beneath.

As you can see, green and black versions are available alongside the champagne-toned recreation of the original (the black is the winner in my eyes). All three measure 41.3mm across and are 11.3mm thick with 100m water resistance; inside they have Seiko's 6R35 calibre, a widely-used automatic across Prospex and Presage models with 70 hours of power reserve and daily accuracy of +25/-15 seconds. The watches are available from February, and each is limited to 1,964 pieces.

Absent the chronograph connection, these do make for handsome all-round models that, without a truly standout quality to them nevertheless fit the middle-of-the-road tool watch bill perfectly well. It just feels like they could have been more than that.

Seiko does have a track record of not quite hitting its marks when it comes to celebrating the past. Now, to be fair, I am often critical of brands that have their heads completely buried in their archives, and Seiko does a decent job of balancing its retrospectives with proper advances in everyday watchmaking, but if you are going to do the whole vintage throwback dance, you may as well do it properly.

Last year Seiko fluffed the chance to steal the Swiss limelight once more when the 50th anniversary of the automatic chronograph came around, eschewing the chance to set the record straight once and for all about who really came first and instead keeping shtum all year before quietly releasing a set of anniversary watches.

Now this. It's not in the same league, of course, but hand any Swiss brand a hook like "our first chronograph" and they'll hang so much celebratory fanfare on it that you'll be seeing it in your sleep. Seiko has shown it can get it right with its dive watches and the key Grand Seiko pieces; it's not a complex formula. Let's see a bit more love for the chronograph, eh chaps?