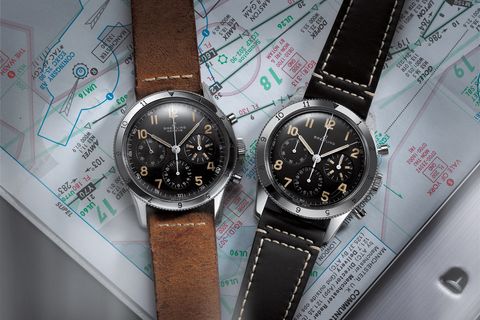 How many mid-century chronograph watches can one brand produce? If it sounds like a rhetorical question, it is nevertheless one Breitling is keen on answering as it announces the arrival of the AVI Ref. 765 1953 "Co-Pilot", a stripped-back vintage styled chronograph to sit alongside the Aviator 8, Chronomat, Avenger and of course the many different versions of Navitimer.

The Co-Pilot, as we're going to call it for now, is billed as the second of Breitling's like-for-like historical recreations, following the extremely faithful and well received Navitimer 806 edition last year. It is based, as the name suggests, on a watch originally produced in 1953 (which is either one year before or one year after Navitimer production began, depending on who you believe). Either way, it was a strong era for chronograph design.

Like the Navitimer 806 recreation, the Co-Pilot uses the in-house calibre B09, a handwound derivation of Breitling's familiar in-house automatic chronograph, the B01. You're looking at a 70 hour power reserve, beating at 28,800vph, with chronograph counters for 15 minutes and 12 hours. The minutes counter has been adjusted from the standard 30 minutes for a reason: Breitling introduces us to a neat little factoid from chronograph lore - apparently the luminous markers on the minutes totaliser are there to help pilots keep track of their pre-flight checks, which it says were not supposed to exceed 15 minutes.

As with so much vintage chronograph mythology, it's less about the practical function today as it is about character, and on that front Breitling's vintage reissues have been very well judged. The 41mm watch has a 12-hour bezel with an arrow pointer at 12, which could add second timezone functionality to the watch.

There is no doubting that Breitling's first thoughts with the Co-Pilot were on producing a faithful modern interpretation of their 1953 chronograph, but it is the similarity to another chronograph of the era, widely expected to get a relaunch this year, that has also turned heads. Breguet's Type 20/Type XX has come a long way since its 1950s origins, but the one-off piece produced for Only Watch 2019 hinted at a return to a much more classic style, which bears an enormous resemblance to the Co-Pilot. Save for the fact that this is a three-register chronograph, the overall aesthetic is remarkably close.

In addition to the main piece in stainless steel, Breitling has take the decision to expand the Co-Pilot's appeal from cockpit to first class cabin, with more strictly limited pieces in rose gold (253 pieces) and platinum (153). The latter comes on a blue dial, the better to tell it apart from the steel model, and both come on brown leather straps rather than black.