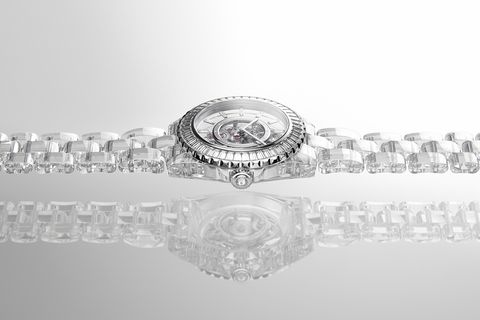 As the Chanel J12 celebrates its 20th anniversary - let's not forget, it was the watch that really got people talking about ceramic, despite Rado having had the Ceramica for a full decade by that point - we have been given news of two very unusual editions.

The first is the J12 Paradoxe, which merges black and white ceramic together. The second is this, the J12 X-Ray, and it is something different altogether.

There have been watches cased in solid sapphire crystal before. Richard Mille made waves when it launched the RM 056 in 2012, the first watch whose entire case was sapphire: it took 1000 hours to machine, cost $1.56m when new and Richard Mille could only make five in a year. Since then the costs have come down as machining has improved; Hublot has a whole range of sapphire-cased watches which retail for around £45,000. And the advances in technology have allowed for more inventive and adventurous shapes, as seen on MB&F's HM6 SV.

Until now, though, no-one has produced a watch cased in sapphire, with a solid sapphire bracelet. The J12 X-Ray, which will be made in a limited run of just 12 pieces, has a three-link bracelet design made entirely from the synthetic see-through crystal: only the hands, crown, bezel, buckle spring bars and bracelet bars are metal. The buckle and bezel are white gold, and both are fully diamond-set. The dial is also sapphire, set with diamond hour markers.

The movement has also had a ghostly makeover: in fact, this is an entirely new calibre produced by Chanel at the facility it co-owns with Tudor. Called Calibre 3.1, it has a number of sapphire components - the mainplate, timer bridge and cog bridge in particular - with the result that the movement appears to float, mystery-style, within the case. There is no word on its mechanical specifications at present, but it is visibly a hand-wound calibre.

The J12 X-Ray will be presented for the first time at Baselworld in April.