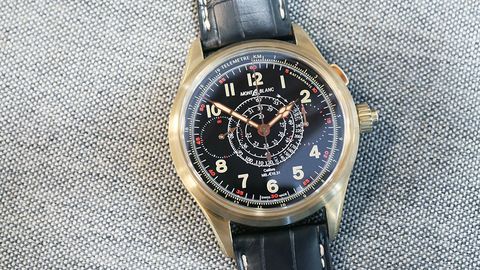 Have we reached Peak Bronze in fine watches? One might reasonably hope so, since this year’s overload – which takes in IWC, TAG Heuer, Tudor, Bell & Ross, Oris, Montblanc and several others – has begun looking rather repetitive, if not bordering on the faddy. However, the appearance of a serious piece of top tier horology – and Montblanc’s 1858 Split Second Chronograph is certainly that – cased in bronze really is an interesting development, not least for its price: this costs just £29,000. For an in-house split-seconds chrono with a movement as fine as this one you’d usually be paying perhaps four times that.

That’s a saving not simply being made in the case material, but it adds a fascinating point of departure. For a few years Montblanc has been mining the propensity of bronze to bring a kind of rustic soulfulness to retro watches, and this one is as retro as they come: the base movement was designed in the late 1920s, after all. The official line from Montblanc these days is that the specialist horology of the old Minerva manufactory at Villeret and the volume watchmaking of the brand’s Le Locle premises are no longer separated out, but one and the same operation. That may be so, but the appearance of collector chronographs like these – this piece is limited to 100 pieces – demonstrate that the Minerva lineage does still survive in its own right, even if it’s buried in bronze.

It’s there too in the old-timey dial design, which departs from the looks of previous 1858 models. The matt black gives a thankfully more serious, formal air than the weathered colourways Montblanc has been favouring for this range, and which can feel a little like set-dressing.

It’s satisfyingly busy too, with a telemetre scale at the periphery in beige, a separate seconds/minutes chapter ring in white, and a tachymetre that spirals out from the centre, along with dynamic red pops from the seconds numerals. The hour numerals themselves are in beige lume for that familiar faux-patina effect – a bugbear for some, but very much in keeping with the old-school ambience.

The movement, Calibre M16.31, is simply sensational. Its architecture derives from Calibre 17-29, developed by Minerva as a pocket watch chronograph engine in 1929 and which, in the modern era, evolved into Cal M16.29, which has appeared in various monopusher models.

In this case, Montblanc has added to it a rattrapante mechanism for split-seconds timing: the mono-pusher at 2 o’clock serves to start, stop and reset the chronograph, while a pusher embedded in the crown activates and resets the rattrapante, splitting the two chronograph seconds hands to leave one stationary at a given moment, while the other continues timing.

The hand finishing of the movement appears very fine indeed, with precise bevels beautifully realised contrasts between polished and grained surfaces. You don’t have perhaps the sheer luxuriousness of textures and anglage as found in, say, an A Lange & Sohne chronograph, but this is nevertheless a very, very serious piece of high watchmaking.

The split-seconds mechanism is one we’ve previously seen from Montblanc in Villeret watches where it was combined with a huge Exotourbillon, the double-spring tourbillon that was once a mainstay of its most expensive watches. To see it realised here in such a pure way is deeply satisfying.

This is a big movement, in a big watch: it’s 44mm across and 14.5mm deep, and packs a fair old heft on the wrist. That undoubtedly makes it a less refined slice of haute horlogerie compared to the smaller, thinner equivalents elsewhere, but it has its advantages in the sheer enjoyment of the movement aesthetics: there’s so much space and depth in this watch, with large wheels, overlapping arrays of sinewy levers, and a huge balance beating ponderously at 2.5 Hz, that peering in and watching it in action is endlessly rewarding for the committed watchophile. Look just behind the wheel of the split seconds mechanism for the characteristic devil's tail arrow on the chronograph arm.

Given the size of the watch, there’s a lot of bronze here, and if you wear it a lot it’s sure to pick up a few dinks along with the promised patina, but it’s very nicely finished, with precisely brushed sides and polished edges. Using bronze could easily seem like an attempt to offer a gold-style watch at a lower price – like gold-plating, for instance. But it’s nothing of the sort: while it’s tempting to imagine the watch in gold, or indeed in steel, it has a warm charm in bronze that is all its own, that feels apiece with the overall spirit of the design. And that, of course, will only deepen in time.

There’s been a heap of bronze watches this year, and indeed a heap of monopusher chronographs (Cartier, Bremont, Vertex and two other Montblanc models among them). In both categories, the 1858 Monopusher Split Second is surely the daddy.