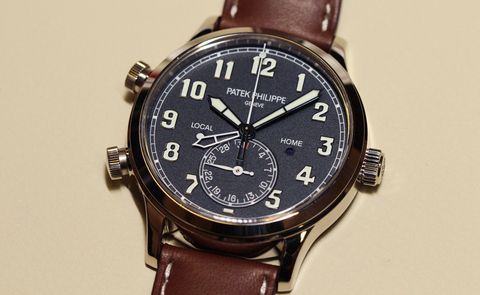 A few weeks before Baselworld this year, an email flopped into the QP inbox that practically knocked us off our chairs. Patek Philipe, a firm that in its history had produced precisely two pilot’s watches, both prototypes from the 1930s, appeared to be launching its third: a GMT that, like recent models from Zenith, Longines and many others, evoked the sorts of wristwatches made for the pioneering days of early aviation. It bore no resemblance or relation to anything in 176 years of Patek Philippe greatness, including those two hour angle anomalies. What’s more, it had a pair of strange, hefty pushers attached awkwardly to its left flank – and Patek Philippe doesn’t do awkward. Just who the heck was pulling our leg?

But, of course, no one was. The Patek Philippe Calatrava Pilot Travel Time 5524 was for real, and the brand was deadly serious about its exciting new baby. (Though it must be said that an accompanying press release proclaiming Patek’s role in “the conquest of the skies” suggested a hitherto unsuspected sense of humour in Geneva.)

It’s a measure of Patek Philippe’s unique reputation and influence that, once it was unveiled at Baselworld, the 5524 was the talk of the fair, drawing anger and bafflement, curiosity and – in some cases – intense admiration. And not just from Patek’s normal circle of true believers and interested followers. At Basel meetings with other brands, from the most hardcore avant-garde indies to the established powerhouses, the questions would come up: “Have you seen it? What do you think? What were they thinking? How dare they call it a Calatrava?”

"They", of course, can call any watch they like a Calatrava, and what they were thinking is fairly easy to calculate: Patek Philippe, more than any watch firm in the world, has devoted collectors who will fall over themselves to own something this unusual (by Patek standards) and unexpected.

We saw that with Patek's 175th anniversary watches last year, which were by turns eccentric, opulent, whimsical and busy, led out by the baroque fireworks of the Grandmaster Chime superwatch. Twenty-five years previously, alongside Calibre 89 – the superwatch of its day – Patek had celebrated its 150th anniversary with a quite different collection: a 33mm officers watch, an even tinier jumping hour, a minute repeater that barely announced its presence. Those watches had set the tone of austere conservatism and hushed excellence for which modern Patek Philippe has generally been known. But times have changed, and so, it seems, has Patek Philippe. It’s being daring, trying out more off-beat ideas and causing a rumpus. Is that necessarily a bad thing?

On first sight, the 5524 is every bit the retro aviation piece, thanks to its muscular case (by Patek standards) and jumbo antique-style numerals. These sit against a dial that’s a deep, mysterious shade of mat grey-glue, of a kind that makes one think of the North Sea at its moodiest.

And yes, the numerals share a likeness with those on Zenith’s Type 20 revival models, as plenty of people have commented. But such Art Deco typefaces were commonplace throughout the early days of wristwatches, especially in pilot’s watches that were designed to be easy to read at a glance in any conditions, and Zenith is far from the only brand to have drawn on this look. Patek has also employed huge, sword-shaped hands that bear some resemblance to those of the 1930s hour angle pieces. The skeletonized white GMT hand is moved forwards and backwards around the dial by those two pushers.

As with the Aquanaut Travel Time, which contains the same Calibre 324 S C FUS movement, there’s a sub-dial for the date at six o’clock, and day/night apertures for local and home time either side of the centre.

The watch is, by any standards, outstandingly made – of course it is. The movement is beyond reproach. The white gold case may be as muscular and “toolish” as any Patek has made (even without those two weird pushers), but its contours glow and glisten gorgeously – the quality of polishing is quite remarkable, as it is on the gold outlines of the numerals, and on the hands themselves.

This is finishing the way Patek Philippe and maybe a tiny handful of other brands can pull it off, and the boldness of the design doesn’t half provide a grand canvas to show this off.

In that sense, in a rather glorious way, the Calatrava Pilot Travel Time answers the question: if Patek Philippe were to bring all its mastery, obsessive perfectionism and luxury values to bear on the most generic style of tool watch, what would be the result? It would and should be as dazzlingly, sensuously beautiful as this is.

And yet. Perhaps sometimes the question of “what if” is better left unanswered. With a history as rich as Patek’s, to me it’s just bothersome that it felt the need to wade into waters so densely charted by others. For all that this watch makes grand art of generic tropes, they remain generic – and that’s something Patek Philippe has never been.

Moreover, I just can’t look beyond those ungainly pushers. While a pilot’s watch with a GMT function makes obvious sense, this watch also plays up the essential flaws – or let’s at least say stylistic restrictions – of Patek Philippe’s travel time system when used in a round watch. With the Aquanaut and the Nautilus GMT models (the 5164 and the 5990), the push pieces are cleverly integrated into the shape of the case. With Calatrava models like the long-defunct 5134 Travel Time or the current ladies’ version, the 7134, it’s just cumbersome.

In this case, it seems Patek’s designers have attempted to make a virtue of the problem, while (possibly) referencing the fact that a prominent style of crown is another traditional feature of a pilot’s watch (easier to use with flying gloves on).

Which is all well and good, were these appendages for winding, in which case the fluting around them would make some sense. But they are not, and even the spacing between the pushers and their angle into the case seems inelegant. And then there’s that date display, which – from a pilot’s watch perspective – seems to be masquerading as a small seconds sub-dial, while intersecting the centre and obliterating the lower numerals. It makes me tense.

It's just very hard to know what to make of the Patek Philippe Calatrava Pilot Travel Time. Will this be a one-off, short-lived collector oddity, or will it hang around in the Patek Philippe catalogue for years to come? Will there be more like it, and other similarly bold moves into genres and styles not considered traditional Patek territory? For now, there's no way of knowing. But one thing I keep thinking: imagine that gorgeous dial – sans date and GMT – in a simpler, more traditional Calatrava style. Now that would really be something.