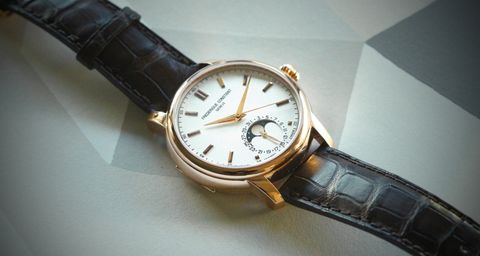 Frederique Constant’s headline announcement last year was the launch of its Horological Smartwatch, while its stablemate Alpina impressed with an in-house flyback chronograph. Comparatively, the watch we’re looking at here snuck out somewhat on the quiet, but I think deserves some recognition: it is, I think, the best watch Frederique Constant offers, and perhaps the best it has made yet. It’s called the Classic Moonphase, it has an in-house movement and it’s priced at just £3,190. It’s quite the charmer.

But, even as a conservative, classically-styled dress watch, it has a bit more pep in its step than many Frederique Constant watches – and it's probably fair to suggest that a significant reason is the debt this watch pays to Patek Philippe. The dauphine hands and block hour markers make one think of Calatrava models like the 5227 – or, with the moonphase/date display at 6 o'clock, the 5396 annual calendar. Not that Patek would add to these a seconds track that seems to have fallen off a chronograph – though actually, I think it works rather well here. It gives the dial presence and body that distinguishes the Classic Moonphase from Frederique Constant's other lunar dress watch, the Manufacture Slimline Moonphase – a watch that's just a bit prim and polite by comparison.

And yes, dauphine hands, block hour markers and moon phase windows are hardly the lone preserve of Patek Philippe. Yet, to me anyway, the overall dial aesthetic evokes Patek more than anything else. And that's all the more the case when you turn the watch over and discover something that Patek has made a speciality in several Calatrava models: a hunter caseback, revealing the movement underneath.

This is a really suave move from Frederique Constant. It adds amusement and appeal to what's otherwise a pretty straightforward watch, and creates from it a talking point that you wouldn't normally expect from a conservative dress watch at the price. And of course, from the brand's point of view, it makes more of a showcase for its in-house movement than a common-or-garden display caseback would do.

Although that, if one were being churlish, is where a bit of a problem lies: for all that this is indeed Frederique Constant's own movement, it really isn't a looker.

Dominated by a central, crescent-shaped plate, it's no doubt a robust engine, and one that would need to be very efficient to produce at the price for which Frederique Constant offers it. The movement, calibre FC-715, delivers a 42 hour power reserve, running at a rate of 28,800 vph. The finishing is fine if unspectacular, the skeletonised and grained rotor adding a bit of fancy detail. But it's hardly the kind of movement that really lives up to the kind of showcase a hunter caseback would suggest.

On the other hand, it's still an enjoyable thing to open the watch and see it. Patek Philippe makes great play of the micro tolerances and ergonomic smoothness of its hunter casebacks; Frederique Constant makes no great claims, but the action is nice enough as it is, and it seems solidly built. Close it, and you have a highly polished case-back that's ripe for engraving.

I wore the Classic Moonphase for around a fortnight, and I have to say I enjoyed it immensely, and garnered a lot of compliments from people who wouldn't normally consider Frederique Constant very seriously.

Among hardcore watchophiles, Frederique Constant has probably received the most attention for its thoroughly classy worldtime watches, also part of the in-house movement collection. But however handsome, a worldtimer is still a pretty niche choice, and the brand has lacked something comparably punchy among its straightforward watches. All too often, its designs are forgettable and lightweight; here, it seems to have cracked it. For all the shortcuts – the ordinary-looking movement, the gold plating that's spent slightly too long in the tanning salon – this is a watch that feels sophisticated and suave. It succeeds in Frederique Constant's stated aim of delivering a luxury product at an affordable price.

The Frederique Constant Classic Moonphase is £2,910 in steel and £3,100 in steel plated with rose gold.