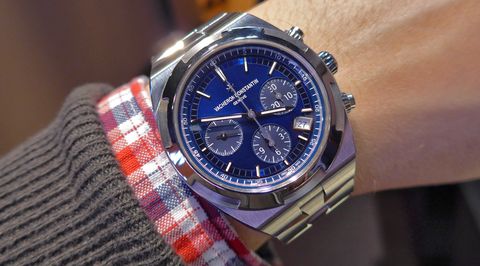 It’s only a year on, but I struggle to recall much of what was launched at SIHH 2015. Whereas this year brands have come out fighting as the luxury downturn bites, in 2015 they seemed caught in the headlights, and the new product was frequently underwhelming.

Among a smattering of exceptions, though, there was one very clear winner: Vacheron Constantin absolutely smashed it. The Harmony collection of hand-wound chronographs was the talk of SIHH 2015, and arguably the most important launch in the firm’s recent history: finally Vacheron, which had always relied on supplied chronograph movements, had come to the party, and in spectacular style.

Harmony gave Vacheron Constantin a suite of hand-wound, haute horlogerie chronos to compare with those of the other top-flight maisons. That left the small matter of the automatic movements used in its Overseas chronographs. Just as it had relied on Breguet-owned Lemania for its hand-wound chronos, the Overseas chrono movements have always come from Blancpain-owned Frederic Piguet (the same 1185 calibre that Audemars Piguet uses for its Royal Oak chronograph).

No longer. This year, amid a wholesale refurbishment of the Overseas collection, Vacheron has closed the circle and brought out its own integrated automatic chronograph movement, which launches in the gorgeous new Overseas chronograph, ref 5500V.

According to Vacheron Constantin, the movement within, Calibre 5200, was five years in development; not surprisingly, the Overseas Chronograph has hardly been centre stage in Vacheron's collection during that time, and was looking seriously outdated. A comparison of the old and new models reveals the considerable exterior changes that characterise the upgraded Overseas collection.


The changes start with the overall shape of the case itself, which is rounder, and marginally wider and thicker, though with a less prominent crown. The famous Overseas bezel is notably beefed up, with six thicker notches instead of eight, and a ring added between the notched top level and the case. The dial, meanwhile, is thoroughly altered. The subdials are equal in size and much more classic in style, with running seconds and chronograph hours swapping places. Hour markers and hands are thinner, while an extra minutes railway track is added inside the chronograph seconds outer register.

Most noticeably, Vacheron Constantin has ditched the big date display at 12 o'clock, opting instead for a bigger logo and a small date at 4.30.

I can imagine this will irk some people; and indeed, I'd generally prefer no date at all to one wedged in between 4 and 5. But I also think the big date on the old Overseas was an encumbrance too far, in what was an over-fussy design. Even with the slight annoyance of the new date window, the 2016 Overseas Chronograph from Vacheron Constantin is far more balanced, elegant and downright beautiful – particularly in the flagship steel version with lacquered blue dial.

One interesting operational improvement is around the screw-down pushers. Whereas these can be very fiddly on plenty of water-resistant chronographs, on the new Overseas Chronograph, Vacheron Constantin has engineered a solution which means it only requires a neat quarter turn to screw down or unscrew the pusher.

With the old Overseas models, the Frederic Piguet 1185 was kept hidden behind a closed case-back. Naturally, with a new five-years-in-the-making engine to shout about, that's all changed and Calibre 5200 is on full show. Interestingly, despite the sapphire back, Vacheron Constantin claims the movement is still protected from magnetism by a soft iron ring. Quite how that works we're not yet sure (a display case-back is generally seen as a hindrance to anti-magnetism, unless you're Omega), or what the level of anti-magnetism offered is – it's hard somehow to imagine it can match the 1,000 Gauss rating of watches with the movement more fully encased in soft iron. The screw-down caseback ensures 150m water resistance.

As with all in-house Vacheron Constantin movements, Calibre 5200 is finished to Geneva Seal standards. There are two particular visual points of interest. First, the 22k gold winding rotor, which is decorated with a wind rose emblem (a traditional symbol of travel, incorporated in this way across the new Overseas models) and sandblasted, grained and polished finishes; and the column wheel in the shape of the Vacheron maltese cross, something we saw last year with the Harmony collection and subsequently the Cornes de Vache chronograph.

One might speculate that the technical parameters for Calibre 5200 were set not just by the need to improve the specification beyond what the Frederic Piguet offers (and let's be under no illusions that the 1185 is anything other than a classic movement of exceptionally high quality – learn more about it here), but to compare favourably with the obvious alternative: Patek Philippe's CH 28-520, as found in the Nautilus chronograph 5980.

And indeed, it shapes up very nicely. It guarantees 52 hours power reserve compared to the 1185's 40 hours – and crucially, does so while operating at a higher frequency, at 4 Hz (28,800 vph) rathern than 3 Hz. That puts it in the same territory as Patek Philippe's movement, with almost identical proportions too. At 6.6mm thick, they each match the slimness of the Frederic Piguet caliber, which was once rated the thinnest automatic chronograph movement in the world (until Piaget pipped it with the 880P).

The 5200 has all the further technical chops that are now de rigeur in any prestige chronograph movement: a column wheel to smoothly govern the chronograph actions, and a vertical clutch to prevent what the Swiss amusingly have a habit of describing as "troublesome hand jerk" – the twitching ahead of a chronograph seconds hand when activated. Moreover, a twin barrel arrangement (both barrels working at the same time) ensures consistent torque and reliability.

Most impressively, Vacheron Constantin has developed an easy system for changing straps and bracelets. Besides the Overseas bracelet with its Maltese Cross links motif – beautifully hand-polished, natch – there are fine rubber and leather straps for each watch. These can be taken off and swapped without the need for any strap-changing tools. This really makes sense in a travel watch – which the Overseas line ostensibly is – since it offers you three styles in one watch.

A few brands have embraced the concept of strap interchangeability, most notably Hublot and Tudor. But a maison as distinguished as Vacheron Constantin taking such a step seems very significant, as brands take ever greater steps to remain relevant and desirable in the age of the Apple watch. And Vacheron Constantin has taken this really seriously – it's a beautifully engineered system that nevertheless appears to be thoroughly secure.

The Vacheron Constantin Overseas Chronograph 5500V is £22,500 in steel (both versions), and £38,100 in gold. That's quite a lot more than the old versions (around £16,500 in steel and £34,000 in gold). But given the top-spec in-house movement, sumptuous new looks, Geneva Seal finishing and performance, and the inclusion of three strap options, the new Overseas delivers a considerably upgraded package that probably does reflect the price hike.

And bearing in mind the fact that Patek – for now, anyway – no longer offers the Nautilus 5980 in steel, the two steel versions are really in a position all on their own.