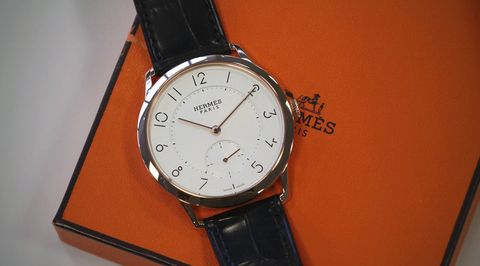 Those of us lucky enough to spend time with watch brands tend to get hyper-sensitised to certain words and phrases. “In-house” causes instant alertness and watchfulness for obvious reasons, while we need to be careful that overuse of “heritage” and “brand-DNA” do not induce instant catatonia. That’s a pity, because those last two ideas are important. Dealt with seriously, these are ideas that add to the whole experience; sprayed on as a last minute veneer, however, they do the opposite.

That doesn’t mean every last detail should be justified by exhaustive monographs on how serif fonts first arrived in the Vallée de Joux, a lightness of touch being essential, but the story has to stack up and feel like it stacks up – we’ve all seen these messages before and instinctively spot a dud. But it also makes the hits stand out.

That’s one of the reasons that Slim d’Hermès is such a treat. It’s a completely new, very contemporary, very stripped back design that barely needs the logo to tell you who it’s from. You get that from the details (the “codes”, another trigger word) you don’t even consciously notice, the tones, curves and shadows that link this design to catalogue staples such as the Arceau.

Impressively, Hermès has launched the Slim d'Hermès as a complete collection. No fewer than three were entered in different categories at this year’s Grand Prix d’Horlogerie de Genève, with the perpetual calendar version emerging as a winner. But it is in the time-only models, in 25mm, 32mm and 39.5mm versions, that the minimalist look is established. Very deliberately designed to fill a perceived gap in Hermès’ collection and in response to market demand for ultra-slim watches, the Slim d’Hermès is nevertheless far, far more than an exercise in managing market niches.

The gap it fills is more stylistic than anything else; the Slim d’Hermès is a plainer, less decorative, more contemporary alternative to Hermès’ existing watch families such as the aforementioned Arceau, Clipper and Cape Cod collections. And as you will already understand, less is very definitely more when it comes to the work the designers have to put in.

The case is barely there and speaks for itself. What matters is what’s on top and what’s inside. The movement is designed and made “in-house” (there we go again) by Vaucher Manufacture, the Fleurier-based haute horlogerie specialist that Hermès part-owns.

The basic movement is some 2.6mm thick which is just outside record territory and completely beyond the sort of dimensions that regular suppliers such as ETA can offer – a movement this slim almost has to be manufacture by default – and, as it happens, it is a minor beauty with its interlocking H pattern and respectable levels of finish.

Slim d’Hermès is the real deal on the dial side too. Slim watches, by default, offer little for designers to play with; there’s no room for guilloché or the play of light and shadows that you get with raised numerals. Relief comes from Hermès’ decision to commission a new font scheme from graphic designer and typographer, Philippe Apeloig – a known quantity at Hermès, Apeloig had already worked on the Saut Hermès in 2012 (think Horse of the Year show with added chic).

As is obvious enough, Apeloig’s solution is both successful and flexible enough to cope with different dial layouts and levels of complexity, sitting as easily against mother-of-pearl in the women's Slim d'Hermès models as the complexity of a QP watch. The "cut-out" typographic style is modern, minimalist but characterful and ineffably chic. Along with the thin needle hands, it gives makes for a design that is lightness itself.

The end result is a 39.5mm dress watch that offers manufacture prestige and a masterclass in how to express your "brand DNA" without making heavy weather of it. The Slim d’Hermès more than lives up to the high expectations that come with the name.