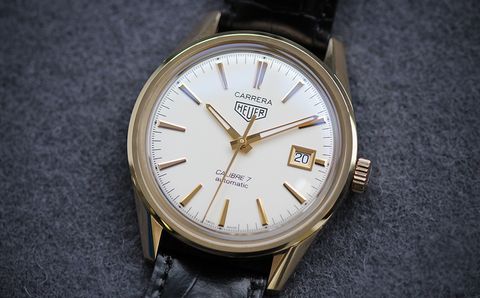 TAG Heuer is, of course, very excited right now about its newly-announced smartwatch, the TAG Heuer Connected. By contrast, it’s made barely a whisper about this little beauty (there isn’t even a press release). But in the traditionally “smart” stakes, this might just about out-do everything we’ve seen in a strong year from TAG. We’ll admit it: we’ve fallen for the TAG Heuer Carrera Calibre 7 “Glassbox” hook, line, and sinker.

Amid all the change being wrought very quickly by CEO Jean-Claude Biver – not just the Connected, but also a complete re-calibration of TAG Heuer’s luxury offering, led by the introduction of the beefy Carrera Calibre 01 – there’s been a notable effort to maintain a sense of history. “Heuer”-branded watches have been present in small numbers in the collection over recent years, but in 2015 these became particularly interesting.

There was the new version of the Monaco, which brought back the original Calibre 11-era stylings, crucially with the crown on the left-hand side of the watch. And in the Carrera Calibre 18, we got a chronograph that is the diametric opposite of the Calibre 01: a small (39mm), old-fashioned chrono that has the feel of a vintage Carrera.

The 18ct gold Carrera Calibre 7 is, in many ways, the dress watch equivalent of the chrono, both going under the “Glassbox” moniker. That refers to the heavily domed crystal sitting over the dial, which recreates the look of the plexi/mineral glass coverings of older watches, in contrast to the mostly flat sapphire crystals used today.

This doesn’t just lend the watch a lived-in, vintage feel, but also just good, old-fashioned design elegance, with the edges of the crystal sinking neatly into a recessed slot around the bezel. It's a far more satisfying, nuanced design than you get with TAG's entry-level three-hand Carreras (most of which are 41mm versus this watch's 39mm), and it wears beautifully on the wrist.

The two elements we'd change on the dial are the italic "calibre 7" logo at six o'clock, which seems so at odds with the rest of the aesthetic, and the lume on the hands, which feels unnecessary. Having said that, the creamy, shimmery opaline dial is pretty lovely, and though we're not generally fans of date windows on dress watches, in this case it works well.

"Calibre 7" is TAG Heuer's name for an ETA 2892 movement (or its Sellita equivalent, TAG Heuer uses both), which is visible on the reverse.

Being 18ct gold, this is an expensive watch for a TAG Heuer three-hander, at £6,400. That's a heftier price than, say, a gold Heritage Spirit with date from Montblanc, and a bit more than this Captain Royal from Zenith. Having said that, there's something that bit special in the vintage stylings of the Carrera Calibre 7 Glassbox, and we're all for it. It isn't connected, it isn't an in-house movement, and it isn't even a chronograph. But it's still one of our favourite TAG Heuer watches in a very long time.