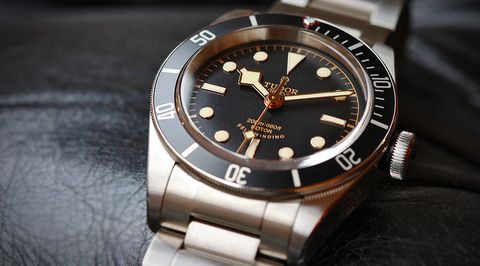 In the normal scheme of things, a watch brand announcing a minor colour variation for one of its main lines wouldn’t be hold-the-front-page news – particularly when that colour is black. In fact, there are really only two watch companies for whom small variations should make proper headlines, and they’re Patek Philippe and Rolex.

But then there’s this, from the latter’s junior partner: the Tudor Heritage Black Bay Black.

When Tudor announced in June a one-off black bezel Black Bay for the Only Watch auction earlier, it blew all the other participants – prestige names like Laurent Ferrier, FP Journe and indeed Patek Philippe itself, the brand that pretty much owns the Only Watch headlines – off the park. This conventional-looking piece from an entry-level brand was, and is, the story of Only Watch this year. And now it turns out that the Only Watch piece, while absolutely unique in key aspects, is just the beginning.

Why the Black Bay matters

So just what is so significant about the Black Bay? Well, there are perhaps two key factors. First off, it’s the simple fact that the Heritage Black Bay, as originally unveiled in 2012 with a stunning crimson bezel followed last year with a blue version, is the watch that launched Tudor back to prominence after years in the wilderness. The previous year Tudor had announced a renewed interest in its own past with the Heritage Chronograph, which recreated (more or less) the look of its “Monte Carlo dial” chronos of the 1970s. A fabulous piece – but it was the Black Bay that really caught the imagination of the watch world.

Here was a watch that seemed thoroughly retro and utterly modern at the same time. It drew on the look and sensibility of Tudor’s historic Submariner pieces, while not looking quite like any of them. It added bronze-coloured dial markings that suggested the patina of an old watch, while appearing far more refined and considerably less gauche than the “faux” patina looks found elsewhere. It could be worn on a cracked, aged leather strap, or a funky textile strap that put it in touch with the military purpose of its forebears. And its sumptuous crimson bezel seemed more vital, daring, and luxurious than any design feature normally found in a £2,000 watch.

The Black Bay was the watch Tudor needed, but also that the watch industry needed. It landed with laser-guided accuracy on a zeitgeist that was suddenly favouring heritage themes and considered, classical design over funky modernism – while still being, in its way, relatively funky and modern. And as such, it showed the way forwards. If Hublot’s Big Bang was the defining watch of the pre-crash era, then there’s a reasonable argument that says the Tudor Heritage Black Bay has been the key design post-2010 – and its influence has been everywhere. Nato straps, sporty retro looks, patina dials, even red bezels – these have become common currency. And if the Black Bay isn’t the watch that invented any of these, it’s the one that makes them work in a tasteful and splendid way, and encapsulates the relationship between historic and modern watch design that is just so very now.

We had the red Black Bay and the blue Black Bay. But what the market wanted, and what Tudor has shown remarkable restraint in keeping back until now, was a black bezel version. A watch that was a little less funky, a little more sober, but also a little more directly related to the original Tudor Submariners of yore, such as this original example from 1954.

Whereas with the blue model Tudor ditched the retro-tinged lume and dial markings in favour of a crisper white, on this model they’re back – the dial and “snowflake” hands are identical to those of the red Black Bay. The black bezel, however, is lit up with a triangular marking in red. The combination of gilt dial accents, black bezel and that little flash of red – though one might envy the red line of writing on the dial of the Only Watch piece – is highly compelling. The combination of detailing, design and build quality is impeccable, as with so many of Tudor’s modern watches.

It’s interesting to think how this sits within Tudor’s marketplace. Arguably it’s the more “purist” Black Bay, given its linkage with the original Submariner styles is that much more overt. It’s certainly the more conventional, sober version – on a bracelet, it pairs more subtly and sensibly with a business suit than the showier red and blue versions, making this Tudor’s ultimate all-rounder watch. I suspect that the red version will remain the connoisseur choice, but this is likely to do huge business for Tudor.

As with other Black Bay models, the watch is available in steel on bracelet or leather strap, with a canvas option included with each. It’s priced at £2,130 on a leather strap and £2,330 on a steel bracelet.