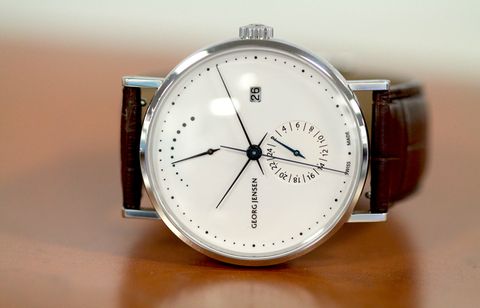 Until recently Georg Jensen may not have meant that much to your average hardcore watchophile, unless they happened to get their wedding list at John Lewis. However, to roll-necked design mavens (let’s paint with broad brush strokes for a moment), the brand is celebrated for its fluid, form-over-decoration luxury wares, which range from silverware and cutlery to jewellery and household objets, as well as watches. Founded by its namesake in 1904, the company would become a key player in the development of Scandinavian design throughout the 20th century. Its Koppel range of watches, named after one of the firm’s most influential 20th century designers, has been notable for its sparse, handsome looks. These have mostly featured quartz movements.

The brand made its Baselworld debut, with three intriguing new watches to show. The simplest is the Mechanical Hand-Wound Small Seconds, an impeccably balanced, 38mm number containing an ETA 7001 movement; at the most complicated end is an Annual Calendar with an off-centre small seconds, double date window and an arched opening for the months. The movement is by modules specialist Dubois Depraz.

In between these two is the GMT Power Reserve, which employs a movement from niche supplier Soprod, and has one of the smartest power reserve displays this side of the Nomos Lambda. It's a watch that seems on the face of it to marry complication, function and original design with great poise. We decided to give it a whirl.

The Georg Jensen Koppel GMT Power Reserve is a piece of pure design as much as it's a piece of useful design, no doubt. It has a crisp, pointy coldness, but also a freshness and creative energy. That should please the roll-neckers out there. The needle hands are reminiscent of a volume meter from an old analogue music machine, and the "just so" dots of black for the time indications and power reserve leave acres of luxurious white space, even with the presence of a crisp second timezone dial at 6 o'clock.

And as stated, the power reserve in particular – a series of diminishing dots that plot their course perfectly like the tail of a comet – is pleasing in the extreme. With the best-designed power reserves, the fun to up as you wind the thing, and that's the case here: as with the best design, form and function are well aligned.

We'd have to admit that the date window is rather squarer than the publicity photographs led us to believe, and the depth of the date numerals from the surface of the dial is problematic: they can be shrouded in shadow from the wrong angle. Moreover, for all its poise, as with many watches with long, skinny hands, this isn't the easiest to read. Even with a blued seconds hand, the hands can be difficult to tell apart. I found myself glancing at the dial for longer than I normally would to tell the time.

The Georg Jensen Koppel GMT Power Reserve contains a Soprod 9335/A10-2, the same movement as found in the Signalman from British brand Schofield. It seems to be a sturdy and worthy affair, and is easily operated, though you'll need a needle or paperclip handy for advancing the GMT hand via a little pusher recessed into the case flank.

The watch is rather deep though. At 41mm across you'd not want it any wider, but accommodating the Soprod movement results in it standing high on the wrist, at 12.33mm. In the specifically burly casing of the equally design-led Schofield that's less of a problem perhaps; this is more delicate however.

If the front is sparse and austere, the back of the Koppel GMT Power Reserve displays a more expressive flourish. The movement is visible through the case-back, and Georg Jensen has designed its own rather elaborate "GJ"-shaped rotor in skeletonised brushed metal, which sits above plates that have been given a perlage finish.

The Koppel GMT Power Reserve is priced at £2,250 in steel, going up to £8,400 in gold. For the functionality and cool design, Georg Jensen is offering good value here. The obvious comparison is of course with Nomos, which for many watchophiles will always be streets ahead thanks to its in-house movement (meaning they offer a slimmer, more proportional case). On the other hand, Nomos does not have a watch offering this combination of functions. For the uber-aesthete who travels and is less concerned with in-house manufacturing, the Georg Jensen GMT Power Reserve is a serious contender. We're looking forward to discovering what else will emerge from the Danish brand in the future.