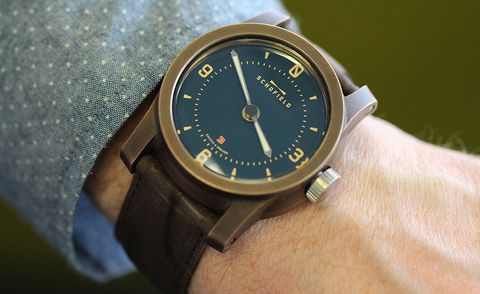 This is such a smart idea. A “beater”, in the parlance of the watch collector, is the watch that’s your go-to regular – the sturdy old warhorse that never lets you down, and bears the lived-in scratches and marks of constant usage. You may have watches that are more dressy, more complicated, more polished and more valuable – but the beater is a watch where the value is personal, since you’ll never part with the thing. It’s an old friend.

Schofield Watch Company, always cannily attuned to the culture of watch buying as well as the business, has taken this concept and turned it into a hipsterish luxury watch with plenty of potential to become an old friend. Launched at SalonQP in November 2014, the Schofield Beater is the company’s third design, following the Signalman and the Blacklamp Carbon. As befits its name, the Beater is also the simplest and the least expensive of the three.

All things are relative, of course: at £2,820 in steel or bronze and £2,910 in titanium, the Beater is hardly a cheap proposition for a watch that’s designed to be knockabout. It’s still a luxury item, though it stretches the concept in an interesting way – after all, what other £3k-or-thereabouts product is intended to improve with the marks and tarnishing of age and usage? Even the "Tiger Loaf" straps are worked on to produce an aged, cracked effect like a loaf of Tiger bread.

While just shy of £3k may seem a lot, besides the rough and tumble, there's that other side of the small “b” beater: the old friend. The Schofield Beater is a watch into which plenty of individual care and character has been poured, from the unusual design and gorgeous enameled dials to the inherent patination and hand finishing of the cases. No two watches are the same, with each one finished personally by Schofield founder Giles Ellis and his tiny team.

The Beater comes in three distinctive versions: in bead-blasted steel with a deep grey dial, in bronze with a dial of rich marine blue, and in blued titanium with dial in pale green. The winding crowns, by the way, are all in stainless steel, contrasting with the cases. That may be problematic for some, and is perhaps something of a compromise, but I think in its way it adds to the character of the watch.

Of these, the most successful in expressing a kind of pure, beater-ish aesthetic – what the Japanese call wabi sabi – is the bronze. It’s been pre-patinated via a chemical process, and while by no means the first bronze-cased watch with a lived-in, industrial feel – heck, Gerald Genta was doing this 20 years ago, and plenty of others (notably Panerai) have since – it’s one of the most smartly realised out there.

The cases of the steel and titanium models have also been heavily worked-on. In the first place, the steel model is bead-blasted, in an effect that reminds me of nothing so much as old workshop machinery.

The titanium model has been blued at high temperature, though the model we saw was rather more on the dark grey side of blue than those in Schofield’s own imagery.

However, any look at De Bethune’s use of this technique will reveal the high degree of variation inherent to it. That means that not only is the titanium model the lightest (for what’s a pretty bulky watch), it’s also the most likely candidate for something truly individual.

About that bulk. For a two hander, the Beater is still a beefy old watch (44mm across at the base, 14.5mm high) and all the more likely to pick up those dings and scuff marks – in the few days I had it on my wrist, it was all I could do to avoid banging it into doors and the like. The case retains the noticeably complex, industrial shape of the Signalman, Schofield’s original watch, but in a monobloc – or “billet” – form, machined down the road from Schofield HQ in Sussex.

The movement is a new-old-stock ETA 2724-r, a workhorse created by ETA in the late 1960s and early 1970s. The ebauches assembled and adjusted for Schofield in the UK, and the movement is visible through the case-back, sunken deep within the framework of the watch.

It’s a slightly odd one this – it’s not a pretty movement to look at or a particularly exalted one, and the very nature of the Beater suggests this is not a watch in which gazing lovingly at its workings is a priority. If ever a closed case-back were appropriate I’d have thought it was this watch.

The dials demonstrate Ellis’s typically sharp instincts for style and tonality – they’re highly unusual and, in combination with the case materials and the straps, approach something evocative and nostalgic. For extra cool-value, the printing is done by the same company responsible for the dashboard dials of Rolls Royce.

It’s all too rare that watch designers achieve such subtle effects – particularly as lit-up by that red B for Beater and the creamy tones of the numerals and markings. Note, too, Schofield’s customary “0” instead of a 12 – score another point for personality and distinctiveness.

That’s really the point with the Schofield Beater. It’s a muscular, somewhat expensive casual watch, but one laden with peculiar charm, care in detail and, frankly, the joy of individuality. I’m not sure I’d go so far as to call the Beater handsome, but it has tremendous integrity and style.