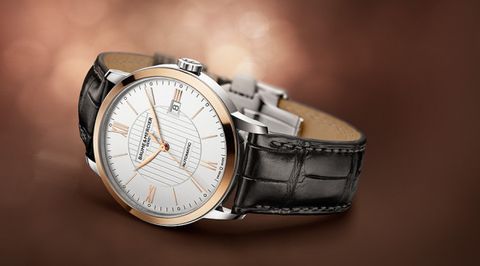 Baume & Mercier and its creative director in particular, the famously kilt-wearing Alexandre Peraldi, have a mission to fill one of the more difficult niches in the watch ecology. “Affordable luxury” usually means nothing of the sort, but if the term can be honestly used by any company it is Baume & Mercier.

The promise they have to deliver on is haute horlogerie values at a price that is noticeably below par, with design that is unthreatening without being dull – a tall order in anyone’s book, but critical to a brand that is as much given as bought to wear. Add that a number of brands have recently switched their attention to this segment and the pressure is really on.

I’m not sure that Baume & Mercier always hit the nail on the head and I never really “got” the Hamptons marketing campaign, but, as January’s SIHH proved, the brand can still deliver on the basic promise. Classima is the focus for 2015 and while neither entirely new or very radical, it is re-assuringly on the money.

The new Classima is reasonably sized; 40mm no longer looks anaemic compared to the competition. It has a design that is a nice blend between classical and characterful – the opaline silver dial has some eye-catching details such as applied Roman numerals and an interesting guilloché treatment.

At the edge of the dial, the minute track has been simplified with luminous dots replacing numerals – a tiny detail, but one that gives the watch a cleaner, fresher look.

Inside, Baume & Mercier uses Sellita movements which are supremely functional and have the advantages both of durability and being familiar to watchmakers across the globe should something go awry.

However, now that IWC has its own tractor movement for watches only just above this price segment, it does raise the question of whether B&M should also be doing the same.

At the price the Classima is expensive enough to need the look and feel of a luxury watch, but this is a point on which Baume & Mercier has always been able to deliver: the crispness and precision feel like they belong to a more expensive watch. The real value of the Classima is that you can safely give this to a graduate or promotion winner in the knowledge that it sends the right message (“well done for growing up”) but isn’t so dull it won’t ever be worn again.