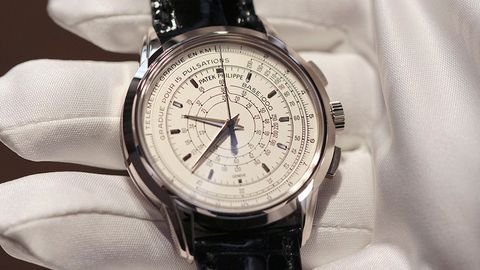 Besides the Grandmaster Chime mega-complication (covered in detail in the last issue of QP), Patek Philippe released a handful of collectors’ limited editions last October, as it marked its 175th birthday. It did the same for its 150th in 1989, when the landmark Calibre 89 pocket watch was unveiled. The accompanying wristwatches then included a tiny (33mm) minute repeater, a three-hander of the same size, a 36mm perpetual calendar/minute repeater, and an exquisite tonneau-cased jump hour. These were so compact and effacing in style as to be almost dainty, and have gone down as true classics of the Philippe Stern era.

The new collection is rather bolder and potentially more polarising. It includes another jump hour, reference 5275, this time with an extravagantly engraved dial and a chiming hour feature; a world timer with an elaborate central moon phase, reference 5575; and the peculiarity featured here, a chronograph that appears to lack essential elements for actually being a chronograph. Specifically, it has no subdials, and therefore can’t record elapsed time for longer than a minute. The chronograph seconds hand is activated in the normal way by the pushers – and hey, can stand in for a sweep seconds if you leave it running constantly.

There is of course method in this. Historically the stopwatch was not the only – or even the primary – function of the chronograph, which is really an instrument of measurement: of elapsed time, but also of speed, distance or even the human pulse. The 5975 takes the latter three, with their familiar circular scales that today generally just act as picturesque chronograph backgrounds, and presents what feels like a measuring tool of the most luxurious and old-fashioned kind.

Thus you have, working in from the outside: a telemeter for measuring distance from an event, based on the difference between seeing it and hearing it; a pulsometer for measuring the heart rate over 15 pulses; and, at the centre, three concentric rings for the tachymeter, for calculating speed over a given distance.

It’s certainly quirky; and a further quirk, perhaps, is the use of Patek’s 28-520 automatic caliber – in such an obviously vintage-flavoured piece, one might have expected the firm's gorgeous CH 29-535 hand-wound chronograph movement, which is currently only found in one model in the collection. But that would presumably have been more expensive, and inserting it into a watch with a solid case-back (in true retro style), would potentially be a compromise unworthy of such a calibre in the modern age. As it is, the case bears a simple anniversary engraving.

In four versions (rose, yellow and white gold with white dials, or platinum with a black dial) this is, at the very least, a fine demonstration of Patek Philippe's peculiar ability to pack a lot of information onto a dial with absolute clarity, and on the wrist this makes it particularly alluring.

The case is also rather intriguing, with its elegantly stepped lugs and strong bezel. At 40mm it’s very much on the large side for Patek Philippe, and it sits beautifully on the wrist.

I’m not sure it’s a Patek classic – more of an odd aside, but an absorbing and highly satisfying one. Just don't expect to see it very often. Only 400 are being made in each metal, and pretty much every one has already been assigned to loyal, quick-off-the-mark collectors. Lucky them.