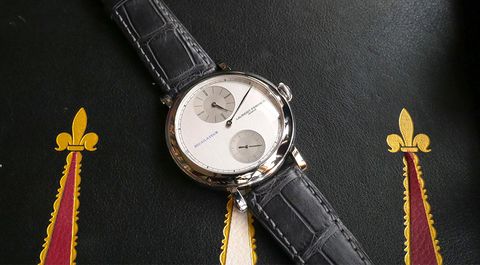 Given the level of acceptance, appreciation and outright adulation heaped upon Laurent Ferrier it’s very easy to forget that the former racing driver has only had his name above the door of his own brand for nine years now.

There are many reasons that he has very quickly become a favourite on the independent watchmaking scene. Certainly skill is one, as the level of finishing on his movements is among the finest out there. Ambition is another; Ferrier does not shy away from a challenge such as his double hairspring tourbillon or harnessing the fiendishly difficult natural escapement.

But it could be argued that Ferrier’s most recognisable and endearing trait comes in the aesthetic design of his watches. His style is refined and elegant - as witnessed by the lines of his cases, which are almost imperceptibly smooth and yet provide ample form - and is yet supremely confident in its sparseness (pushed perhaps as far as it could be reasonably expected to go by the Galet Square Boreal). There’s a balance and harmony to his designs that Ferrier has no doubt spent a lifetime developing in theory before implementing in a prolific burst of creativity over the past decade.

That’s what makes the latest developments from his Plans-les-Ouates headquarters so surprising. Earlier this year came Ferrier’s Galet Montre Ecole, a charming love letter of a watch, which channels his formative years as a watchmaker. But its brushed metal dial and round case with straight lugs were certainly a departure from the fluidity of Ferrier’s previous designs.

Rather than return to business as usual and abandon this experiment, Ferrier has repurposed this new 40mm case shape to further plough this watchmaker-focused furrow with an unexpected regulator dial, based on his 21,600vph micro-rotor movement with 72-hour power reserve, in either steel or white gold.

The reason it sits, for us at least, next to the Montre Ecole in a thematic sense is that traditionally, regulator clocks were used by watchmakers as reference clocks. The separation of hours, minutes and seconds onto separate dials enabled greater at-a-glance legibility of each - actual timekeeping in the day to day sense wasn't a priority. Moving from a watch inspired by his beginnings as a watchmaker to one inspired by a watchmaker's reference can be seen as Laurent Ferrier returning to a theme of pure horology that fits perfectly with the brand's record of ultra-classical designs.

Once again he has opted for the more industrial - although still seriously smart - feel of a vertical satin-brushed metal dial with an hour sub dial at the 12 o’clock position, small seconds at the six o’clock and a familiar leaf-shaped central minutes hand. The design feels ever-so-slightly top-heavy as the hour sub dial is noticeably larger than the small seconds beneath it. Both are accentuated by their snailed finish, which plays with the light creating a spectrum spanning dark greys to salmon pinks.

Although Laurent Ferrier has used lettering on his dials before (beyond company branding, you'll find his tourbillons are annotated, because in an increasingly rare display of modesty, they are not exposed though the dial themselves) it is still the exception rather than the rule, so the presence of ‘Regulateur’ printed in a mid-blue - colour matched to the minute numerals at the compass points within a slate grey railway minute track - signals the fact that this watch is something quite different for him.

The Galet Regulator is available in the UK from William & Son, and is priced at £29,400. Interestingly enough, that is the same price as all precious metal time-only Laurent Ferrier watches, so you could argue you're getting a little bit more for your money than if you'd bought a standard Galet Micro-Rotor, although of course mechanically there's little to separate them.