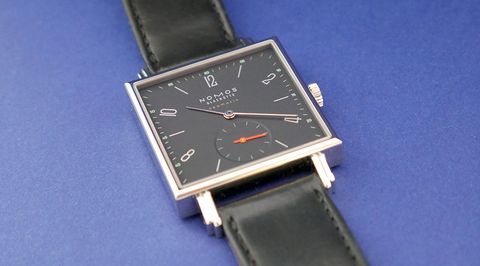 Nomos has always been proudly unisex. However, the launch of the Tetra Berliner series was a definite ploy to appeal to women who wanted something with a little more flair than the Bauhaus austerity of its other designs. The dials were in delicate pastels, the straps were soft grey velour leather and there was no way you’d ever see a man wearing one. And earlier this year it released an entire range of Neomatiks in “champagne” beige, the most overt move towards men’s and women’s collections yet.

Obviously some men weren’t happy about this, which must be the reason why this year Nomos has decided to release its Tetra in a 33mm case with either white or this rather sumptuous dark blue dial. When we met this watch, back in Basel this year, it was described as “tiefblau” in German, which roughly translates as “deep blue” or, if you’re feeling more poetic, “cerulean”. Visit the Nomos site these days though and you’ll notice it’s now referred to as the Tetra neomatik “nachtblau” (midnight blue).

It’s just the name that has changed, however – the colour is apparently the same as before. Rumour has it this name switch could have been made with one eye on consistency with future blue-dialled models. Let’s wait and see.

In all honesty, though, the blue on this Tetra is so deep it’s almost navy, and from some angles looks almost dark grey. It’s nowhere near the rich tone of the Lambda (also “teifblau” – go figure…) that came out last year.

It is also a neomatik, which means that it houses Nomos’s new DUW 3001 movement. It was created by the brand’s design engineer Theodor Prenzel and is incredibly thin (3.2mm) for an automatic, however thinness wasn’t the guiding principle when it came to creating this movement. The prerequisite was an in-house gear train, which the R&D department managed to optimise by changing the order, angle and number of teeth, raising the efficiency to 94.2 per cent.

And if that wasn’t enough, less space meant less room for tolerances, so things like the ratchet wheel had to be placed entirely under the three-quarter plate. Nomos even introduced a new material with low-friction properties to ensure no friction would be created between these incredibly thin parts. And it also contains Nomos’s Swing System, the brand’s proprietary escapement.

But that’s the back end – what about the watch on the wrist?

Actually it’s probably better to appreciate it off the wrist first. The first impressions are that Nomos has done it again and launched another interesting watch that is unexpectedly cool. The slim lugs pared with the square dial give an Art Deco rather than Bauhaus feel, which when combined with the midnight blue dial hints at a cocktail watch.

However the colour pops from the small seconds hand and the five-minute markers, which for the moment are indicators of the DUW 3001 within, point to it being more of a daily wearer; an impression compounded by the lovely robust leather strap.

It’s when you put the watch on that things start to deflate a little. While the proportions are right in terms of the space it occupies on a man’s wrist, those delicate lugs start to look too thin for it to really be worn by a man. When you compare it to other square men’s watches, such as TAG Heuer’s Monaco it just doesn’t have enough chunk to be really manly.

With the Tetra, the slimness of the lugs and bezel give the impression of something more dainty and feminine. However, put it on a woman’s wrist and it looks a tad too masculine (or so this household thought).

Whereas many brands have been guilty of the “shrink and pink” (making a man’s watch into a woman’s simply by making it smaller and giving it a pink dial), it feels like, with this Tetra, Nomos has done the reverse – created a man’s watch out of a woman’s simply by upping the diameter and making the dial a more masculine colour. It’s rather like Cinderella’s glass slipper. Beautiful to look at but only a few people can actually wear it.