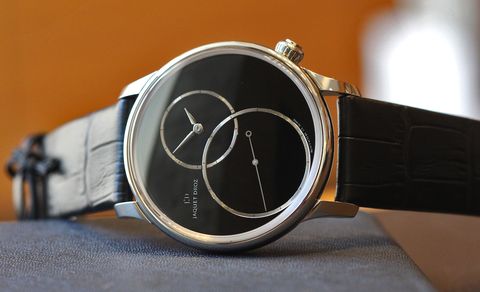 Black dial dress watches are a bit jazzier than their polite, white-dialled brethren, and perhaps that bit more rakish: if a white dial means you’re going to the ball, a black dial means you’re down for the secret after-party as well. It’s a look that Jaquet Droz has run away with this year, with an unexpected quartet whose smooth black dials are cut from onyx stone, and the highlight is the Grande Seconde Off-Centred Onyx.

There’s a velvety smoothness and depth to an onyx dial that’s perfectly suited to the formality of the dress watch – it’s just that bit more exotic and special. The surprise here, given all that, is that these four watches are cased in steel – not generally the appropriate casing for your black tie ticker.

This year various specialists in precious metal horology have been delving into steel watches to lower their entry points, amid darkening economic forces. Blancpain, Girard-Perregaux, Moritz Grossmann and most recently Piaget are among those playing to the crowd in this way; but I’d say that Jaquet Droz has turned market necessity into something genuinely interesting and enticing. Let’s take a look.

Highfalutin it may be, but Jaquet Droz creates poise and elegance in a watch dial like almost no one else, with meticulous details and acres of limpid surface to get lost in. The hallmark design is the Grande Seconde, where an outsize seconds register on the lower half of the dial forms a figure 8 with the smaller minutes/hours register above it (a trope inspired by an 18th century original from namesake Pierre Jaquet-Droz).

In this case, it adds up to a dress watch that is cultured, luxurious and, frankly, rather magnificent.

Here we have the Grande Seconde design code boiled right down to its purest elements, while the off-centring of the display gives it all a sense of movement and pep. Unlike other versions of the Off-Centred, which feature much more fulsome indexes and numerals, the interlocking registers are formed from mere slithers of 18k white gold, which glint and shimmer on the rich onyx surface.

It’s a very pure, assiduous piece of design, and as ever with Jaquet Droz, the execution is flawless. At 43mm across, it’s not one for the skinny-wristed; but while that might normally be a complaint, the extra expanses of plush onyx surface are worth it.

To achieve the off-centred arrangement the movement has been rotated 30 degrees, and the winding stem necessarily shifts around as well, which additionally benefits the watch’s slightly exotic character. Jaquet Droz movments are supplied by Swatch Group stable-mate Blancpain, and that means both fine finishing and top-flight tech, including silicon hairspring and pallet arms, two barrels offering a healthy 68 hours of power, and oscillations at 4 Hz.

You might question whether anyone willing to pay £8,100 for a dress watch – this really does have too rarefied an ambiance to be considered an everyday wearer – might not want to step up a bit further to have something in gold. However, the delicacy of design, the finish (the steel is polished to gleaming perfection) and that onyx lustre makes this feel precious in its own right; combined with Blancpain-standard watchmaking, this is a true contender.

At 39mm, the Grande Heure Minute Quantieme is more wearable and less overbearing than its grander alternatives in the Jaquet Droz catalogue, but still exhibits the sense of refinement and quality. The onyx dial joins other esoteric versions like blue Cotes de Genève or anthracite sapphire; it’s a bit more conservative, perhaps, but to me it’s also more handsome, and less stuffy. The red tip of the seconds hand animates the look nicely.

Its appeal does rather depend on whether you can accept the way the date is displayed, in a kind of sunken wedge in the dial; I’m not sure I’d tolerate it ultimately, but it’s a respectable departure from the norm, and that’s the very least we should expect from Jaquet Droz.

Inside is the Jaquet Droz 1150.P (Blancpain-made, as are all the movements here), with the same specifications of silicon balance spring and pallet arms, double barrel and 68 hours power reserve.

It’s somewhat unexpected that the Grande Seconde design has not been realised in dual time form until now, but this year it finally arrived in some style. Besides showing the seconds, the large lower dial has an additional 24-hour GMT register, and a date indication. A lot of information to fit in, but once again the dial dimensions play to design’s favour; the flagship rose gold version, by the way, is heartbreakingly lovely, and really plays up the pocket watch origins of the Grande Seconde code.

In black onyx and steel, the watch takes on an entirely different, more muscular and modern character, thanks in part to some inspired chromatic choices: electric blue date digits and a couple of flashes of red.

The Grande Seconde Dual Time is powered by Jaquet Droz calibre 266H24, with the same specifications as above, though power reserve is a little less at 65 hours.

Switzerland has a serious thing for deadbeat seconds watches at the moment. For the uninitiated, a deadbeat seconds watch – or “dead second”, or “true beat” – is a mechanical watch that features a ‘ticking’ seconds hand, marking out each second individually. Thanks to the modern quartz watch we’re used to its motion, but in fine watchmaking it’s a very arcane feature.

Trend or no trend, a deadbeat seconds was always going to be a fitting adoption for Jaquet Droz, given its preponderance for grande seconde displays. The Grande Seconde Deadbeat appeared in 2015 in rose gold, and this year has also seen a black dial version of that, with the dial in sumptuous grande feu enamel.

The steel/onyx version is, like the other watches here, more minimalist in style, again replacing elaborate traditional registers (just the upper one, in this case) with an applied gold ring notched with hour marks; it gives the Deadbeat more of the feel of an instrument, which makes sense given the complication.

But, for the same reason, it also feels rather sterile – the techy nature of the deadbeat is given life in its more lavish gold versions, while the attraction of onyx seems more otherworldly and elegant in the other watches here.

The movement, Jaquet Droz calibre 266H24, in this case oscillates at 3 Hz rather than four, and as you’d expect the complication eats up rather more energy, with a power reserve here of 38 hours. It’s an elegant watch, no doubt; but perhaps £15,800 tips the scales that bit far for a steel watch that’s quite so cold.