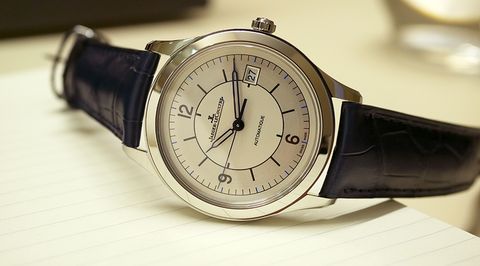 Described by many as "the watchmaker's watchmaker", with an unimpeachable pedigree in in-house movements (not to mention movement supply to other top-level brands), Jaeger-LeCoultre is perhaps best associated with the Reverso, but is also a true master of complications at every level.

Nevertheless it, like so many other watch brands, has been feeling the pinch lately. Following the same overarching trend that has seen everyone from Richemont stablemate Piaget to indie brands like Moritz Grossmann release less costly, steel-cased models, Jaeger-LeCoultre has reacted by producing some new entry-level pieces in its Master collection. How do they measure up?

In fact, the new Master Control Date Stainless Steel reference 1548530 (to give it its full name) is the cheapest Jaeger-LeCoultre men's watch in the brand's entire range, at £4,800. A Reverso Medium comes in at £5,100 (the small Reverso models are quartz-powered and aimed at ladies). The new Master Control also undercuts the previous entry-level and identically-named Master Control Date by £350. You can compare them for yourselves here. (As a side note, the fact that Jaeger-LeCoultre puts a £1,450 premium on a steel bracelet - £6,600 over £5,150 - is slightly shocking.)

Comparing old and new Master Controls is interesting. Line these watches up together and you'll note that, quite naturally, they have a lot in common. The same movement, for a start: the single barrel, in-house automatic calibre 899/1 with 219 components, beating at 4Hz. They use the same 39mm case and crown as well. Other components - the sapphire, the pin buckle, the leather strap (one black, one blue) are also interchangeable.

The only difference between these two watches is in the dial. The new model has a sector dial - such as we have seen from Laurent Ferrier, and for the record, in a style not dissimilar to my very favourite Patek Philippe Calatrava - with a plain brushed silvered finish underneath.

The numerals are transferred rather than applied (i.e. solid metal pinned through holes in the dial), and rather than the polished dauphine hands of the older Master Control, we get some pipette-shaped stencil hands. This, not to put too fine a point on it, is where the money has been saved - but let's leave that aside for a second. As a look, it totally works. Jaeger-LeCoultre was in need of something a bit more youthful in the Master family (arguably, across the whole brand) and I'm sure most people won't think twice about how on-the-nose it is in terms of chasing current trends. It brings charm and energy to a normally conservative set of watches.

Since this is a new entry-level watch for Jaeger-LeCoultre, let's think about what else you could be spending your money on instead. Assuming you're going to want equivalent levels of "big brand" recognition, you could be looking hard at fellow Richemont brand IWC, whose new Ingenieur offers a lot of the same aesthetic cues from the 1950s albeit in a more buttoned-up, sensible kind of way. That comes in at £4,750 on a bracelet (£3,950 on a leather strap). Sticking with IWC, you could also get your hands on a Portofino mid-size and change, but that's a bit more dainty than the Jaeger-LeCoultre.

So are a lot of the other options. Zenith's new Elite Classic, which costs £4,200, is lovely but more of a rival to the old-style Master Control, not this young new version. Ditto the Girard-Perregaux 1966 in steel (which would also push you up to £5,500). For around the £5,000 mark you can look at a Cartier Drive in stainless steel, or a Bulgari Octo Roma, both of which might satisfy your desire to stand out from the crowd - but neither is exactly treading on the Jaeger-LeCoultre's toes. There isn't a lot out there like this right now.

How this watch fits into the range is a very similar story to its time-only sibling. It shares a 40mm case with the existing Master Chronograph (although is 0.4mm thicker, in case you're wondering) and shaves £550 off the price (£6,700 compared with £7,250). Functionally, it shifts to a two-register chronograph display which is more overtly vintage-inspired and by far the easiest way to keep that lovely sector styling without the whole thing getting horribly crowded. There's a blue tachymetre scale around the edge of the dial.

Talking of crowding the dial, it notably omits the date window from the older Master Chronograph. The handset and colour scheme are the same as the Master Control, with printed numerals again, and it comes matched to the same blue leather strap. Inside is Jaeger-LeCoultre's in-house automatic chronograph calibre 751G - a modification on the calibre 751A/1 in the older model - which you're not going to see as Jaeger-LeCoultre has opted for a closed caseback on the new watch.

Again, something of a similar story to be told here. In the market for a retro-styled, some would say "dress", chronograph from one of Switzerland's pedigree brands, in steel for less than £7,500? You're going to be back to IWC, where you'd consider the Portugieser Chronograph for £6,250. Or Zenith, which has an El Primero for every day of the year, and plenty between £6,000 and £7,000. Girard-Perregaux's Competizione isn't quite in the same league stylistically, and Chopard's Mille Miglia pieces wear their racing connotations a bit to boldly to rival the technical aesthetic of the Master Chronograph.

In short, Jaeger-LeCoultre has pulled off an unusual trick; that of making a watch that you instinctively feel looks a lot like other watches, but on closer inspection has no real like-for-like competitor.

On the wrist both this and the time-only Master Control wear very nicely, coming up perhaps even smaller than their sizes would suggest - perhaps a trick of the mind brought on by the concentric circles of the sector dials. Some people have criticised the less expensive dial finishing as not representing what they would expect from Jaeger-LeCoultre; all I can say to that is: it is what it is. Yes, you're getting a slightly more basic finish, and losing the texture that comes with applied numerals. But it's hardly slapdash and, taken together with those hands and the use of colour, it doesn't really offend me at all.

If I was feeling harsh I'd say that these new models share more of an aesthetic with other heritage-aping offerings from less expensive brands like Longines or Eterna. But going hands-on with one, it remains a cut above. Certainly the watches feel as well put together as something from Jaeger-LeCoultre should. The movement's great to look at and you know the quality is there - at this price, some brands are still selling you ETA or Sellita derivatives. My feeling is this represents a toe in the water for Jaeger-LeCoultre, and we can expect to see more emphatic designs in the near future - by which point this will feel less like an outrider and more like part of the furniture.