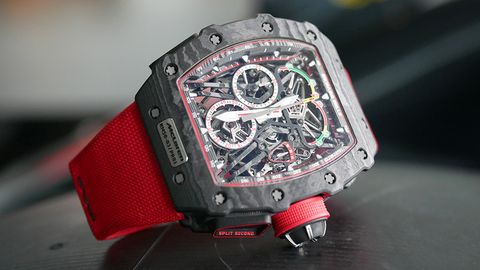 This is the first watch produced under Richard Mille's partnership with McLaren. It's a split-seconds chronograph tourbillon, but it's so much more than that.

Or should that be "so much less"? This watch - including the strap - weighs just under 40 grams. That's a new world record for a chronograph, and makes for a seriously dissonant experience. Pick it up and you jerk your hand reflexively in anticipation of having more weight to lift. When you're wearing it with the "comfort strap", pictured, there is no sensation like the feeling you might have left a £1 million watch lying around somewhere - because it's so light you genuinely can't tell its on your wrist.

The insane weight savings (and the price, to an extent) are down to Richard Mille's persistent pursuit of ever-more advanced materials for its cases, and a ruthless regime of skeletonisation. The diet this movement has been on would make Fernando Alonso's training routine look positively indulgent; it weighs just seven grams, total. When you think of how many components are required (Richard Mille hasn't given a precise figure, but it must be north of 300), it's a staggering achievement. The movement is made mostly from titanium and hangs in a cage of TPT carbon.

The case looks like a "standard" Richard Mille case in many respects. Same tonneau shape, curved in every direction making it just that much harder to machine. Same carbon-fibre layering that we've got used to since the introduction of North Thin Ply Technology a couple of years ago. But this case has been doped with graphene, taking it to the next level in terms of structural rigidity, strength to weight ratio, tensile strength and torsional resilience. In layman's terms, it's practically magic.

A quick primer on graphene: Developed in the modern era by scientists at the University of Manchester, graphene has in principle been known to the scientific community since at least the 1940s (its existence was theorised as far back as 1859); it was observed under an electron microscope in 1962 but only properly synthesised in 2004. It is an allotrope of carbon - a form of carbon whose atoms are aligned in a two-dimensional sheet, one atom thick. In this sense, it's a cousin to diamond or graphite - chemically identical, distinguished by the arrangement of the atoms within.

Graphene's phenomenal strength and lightness is its USP - 200 times stronger than the toughest stainless steel. But what use is a material that only comes in microscopically thin sheets when it comes to building watch cases? As some were chuckling to themselves at SIHH in January "Richard Mille has taken a thin material and turned it back into a thick chunk". Not exactly. Speaking to McLaren Technology's chief operating officer and CEO of McLaren Racing, Jonathan Neale, we asked how graphene is used in the real world.

"Our interest in materials, including the graphene that went into this watch, is something that we can turn into lap times. The graphene itself doesn't have bulk properties - if you make a block of it, that would in itself not be very strong. The material properties come into their own when its 3-5 atomic layers thick. At that point you can dope other structures; if you take a carbon fibre resin system like this watch has, you dope it with small platelets of graphene and you get much better bonding and structural integrity between the layers. Suddenly you have a stronger, lighter, more efficient material thanks to the graphene. The guys in Manchester refer to it as platelet reinforcement."

So now you know - graphene feeds into Richard Mille's resin polymer cases in a similar way to carbon nanotubes on the Yohann Blake watch from a couple of years ago. The RM50-03 is also offered on a rubber strap which has also been doped with graphene. In for a penny, in for a pound, I suppose - although the elasticated textile strap that I tried was one of the most comfortable watch straps I've ever worn. The watch isn't small (44.5mm by 49.65mm, and 16.1mm tall), but it wraps neatly to the wrist.

The only drawback of this strap is that thanks to the elastic, every time you take it off you stand a not insignificant chance of pinging a million pounds worth of watch flying into the nearest hard surface. Richard Mille claims the RM50-03 can withstand 5,000G of impact, but that's not something you want to test very often - especially when only 75 of these will ever be made.

You might be wondering what the other indicators on the dial are for. At 1 o'clock we have a torque indicator, showing the tension of the mainspring. You want to keep it between 53 and 65 DNMM, apparently. Opposite it, with a similar red-green-yellow colour scheme, you have the power reserve indicator, from 70 hours down to zero. At 3 o'clock, near the crown, you have the winding-setting-neutral indicator that lets you know what position the crown is in. The rest is your standard chronograph, with seconds at 6 o'clock and minutes at 9 o'clock.

One thing we have to clear up on this watch is the colour. It's not a mistake, as many have said, but it is the wrong colour. The finished production watches will have a crown, strap and bezel detailing in a shade of orange that's a lot closer to McLaren's familiar team colour. This watch is one of just two existing prototypes in the world (the other is going round the world on Stefan Vandoorne's wrist), and it was designed in accordance with last year's McLaren-Honda F1 car, which bore a reddish, almost neon pink shade of orange on its nose. The chronograph pusher detailing is intended to remain red.

Richard Mille's partnership with McLaren is set to last a further decade. And we learnt while visiting McLaren with the watchmaker that Richard Mille is now partnering with McLaren Automotive as well as McLaren-Honda F1 - so we can probably expect to see watches that represent a greater tie-in with the road cars in the next year or two.