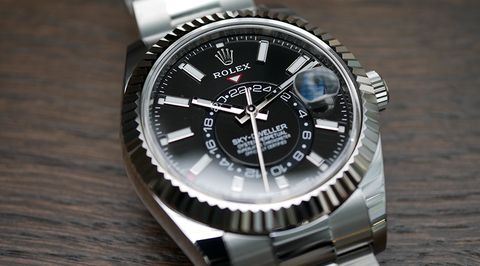 It was launched in 2012, and is one of Rolex’s most complicated watches, combining a dual time zone function with an annual calendar. Partly thanks to that, and partly thanks to its looks, it often gets unfairly lumped in with the Yacht-Master II. Like that watch, it is mostly spotted in two-tone or solid gold (indeed, it’s not available in plain old steel).

This year, however, it has had a re-design that brings it much closer to “heartland Rolex”. It now comes in six new references with baton hour markers instead of Arabic or Roman numerals; these are either steel and yellow gold or steel and white gold “Rolesor” cases and bracelets, and it’s the latter that really caught our eye.

They come with a choice of three eminently sensible dial colours – black, white and blue – and lend a stealth factor to a watch that previously knew only how to be conspicuous.

Thus altered, the Sky-Dweller becomes a watch that could almost pass for a Datejust or Oyster Perpetual at a glance. Even on closer inspection, a casual observer would not credit it with the full functionality that it possesses; the annual calendar isn’t represented by a multitude of subdials or windows. The month indicator does inject some colour contrast, be it in red on the black or blue dials, or white against the brown dial of a yellow gold model, but it’s hardly clutter.

Ok, so the typeface of the second time zone ring is still a bit heavy. And I can’t believe anyone would tell you that all four of those lines of text serve a purpose – but there isn’t a model in the professional range that doesn’t boast of its “Officially Certified” status.

Past criticism of the Sky-Dweller hasn’t been confined to its looks, however. The operation system, which sees you rotate the bezel through three active positions to set home time, local time and the date, all via the crown, can seem like a solution in need of a problem – or at least, an overly complex way to control these functions.

Successfully operating it requires you to remember the different bezel positions and what they do. There are four positions in total – one for each setting function, plus a “rest” position where none are engaged. If you always leave it in this final position, over time it should in theory become simple to set.

Our experience – confined as it was to a short space of time – was that you’re likely to resort to trial and error. But once that’s done, it’s honestly not that difficult to do; set your home time (i.e. the 24-hour ring) first. Then set the local time in one-hour jumps. Lastly set the date. The biggest problem we encountered was that the fluted bezel just isn’t the grippiest of surfaces – if it hasn’t been used in a while, it can be stiff and your fingers slide off it awkwardly. There’s nothing cool about clumsily manhandling a £10,000 watch.

So it’s usable, plenty clever, and – to our eyes at least – better looking than before. So far so good. The bigger questions are: firstly, will people spend five figures on a bi-metal Rolex that is in fact mostly steel (the only element of white gold is on the bezel); and secondly how dearly do you prize the annual calendar as a complication?

Because if the ability to understand the lengths of months isn’t a deal-breaker for you, and perhaps the styling still doesn’t tug at your heartstrings, it’s hard to see why you wouldn’t move across the display counter to the GMT-Master II, which offers better dual-time functionality and more iconic looks. You would need to adjust the date monthly, and you lose a few grams heft by saying goodbye to that white gold bezel, but you save nearly £4,000 in the process.

All of which may make the discreet-spec Sky-Dweller a permanently niche choice – but for what it’s worth, it’s now a choice that stands proudly next to the rest of Rolex’s range.

The Sky-Dweller measures 42mm across and houses Rolex’s in-house automatic calibre 9001, with a 72 hour power reserve and a paramagnetic Parachrom hairspring. Prices begin at £10,600 for the model shown, and go up to £35,850 for the full gold models.