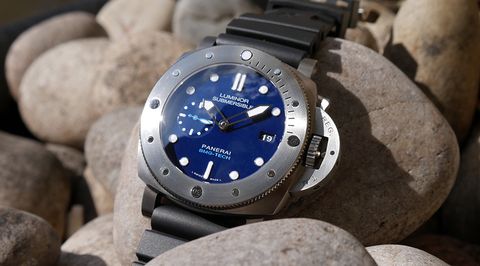 This is the latest high-tech watch from Panerai - the Luminor Submersible 1950 BMT-Tech Automatic 3 Days. Yes, they need to get the length of their names under control, but you can't criticise Panerai for effort these days. We've had a genuinely thought-provoking concept in the form of the Lab-ID, and countless desirable iterations on the trusty Radiomir and Luminor designs. A personal favourite remains the slimline Luminor Due from last summer.

So you could be forgiven, perhaps, for experiencing a touch of Panerai overload. But stay with us, because this is a good one - and really nowhere near as complicated as the name might sound. Mechanically it is unchanged from the standard Luminor Submersible, with the in-house Calibre P.9010 doing the business under the bonnet.

That's the same movement found in most other Luminor 1950 references, from the Carbotech of a couple of years ago to the 42mm models. It has, as the name implies, a three-day power reserve and is a slight upgrade on Calibre P.9000 (it adds better support for the balance bridge, and slims down the movement overall, to 6mm).

What's interesting about this watch is an all-new case material. As in, not just new to Panerai but something no-one else has done before. The case is made from BMG, which stands for Bulk Metallic Glass. This describes an alloy of various metals which is formed under high temperature and pressure to give unique physical properties.

Panerai is tight-lipped on the composition of the alloy, but the base metal is typically Zirconium. When the alloy is formed, and the metals melted together, the atomic structure of the metals is changed from regular crystalline structures to an amorphous liquid structure. What's clever about BMG, or as it is also known, LiquidMetal, is that as the alloy cools, the atoms within remain in a randomly aligned state.

That means the alloy is technically a glass, hence the name. It's described as "Bulk" simply because the companies producing it have mastered the process of doing so at large scales. The end result is a material that's tough and lightweight, boasting a better strength to weight ratio than steel and much greater scratch proof resistance. We understand it is also superior to titanium in terms of resilience but perhaps not weight.

So you're getting a Panerai Luminor Submersible that's lighter and tougher than before. Told you it was simple. What's nice is that you're also getting quite possibly the smartest looking Luminor Sub; the BMG case has a really glossy lustre once finished (Panerai has given it a very light brushing, as you can see, but to the touch it's very smooth). Paired with the shiny new case is a really luscious new blue dial. It's not enamelled, just polished, but there's real depth to the colour.

On the wrist, it's compelling. The lightness isn't as stunning as it was with the Carbotech, but for a 47mm watch it certainly feels like some witchcraft is at work. It's natural to wonder how it would hold up after a few years of wear and tear but assuming it does as claimed and keeps that finish, you could make a strong case for it as a multi-purpose daily wearer, not just a hardcore tool watch.

Attentive readers will have picked up on the word LiquidMetal a few paragraphs back. This is the same stuff that Omega has been using in its Seamaster Planet Ocean bezels for a few years now; the material is not proprietary to Omega, but until now no other brand had used it. And no brand has produced a watch cased entirely in the alloy.