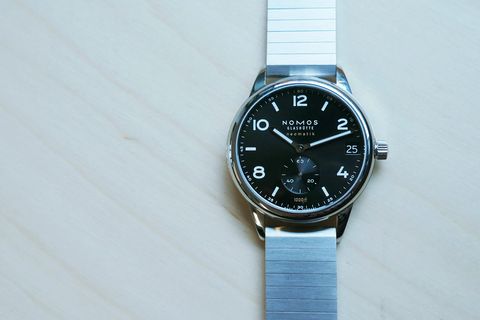 For those of us that have followed the growth of Nomos Glashütte as a brand for several years, it has been interesting watching the brand tackle the question of how you expand from those mid-century design-focussed roots while retaining the elements that made everyone like you in the first.

You come to Nomos for slim, smart, elegant, gender-neutral watches with a unique sense of style and character. Cleverness on the inside, restraint on the outside. Now, the brand wants you to come looking for a watch that ticks all the above but that’s also large, sporty and more masculine.

It’s at this apex of tension that we find the Club Sport Neomatik, the brand’s first proper stab at a dive watch (launched alongside two versions of the Tangente Sport). Listing its bald attributes, it covers most of the basics: 1000ft water resistance; clear and legible numerals and hands; strong luminova and a metal bracelet. Preventing it from meeting ISO dive watch requirements is a unidirectional rotating bezel – really, a leap too far for Nomos’s design language, although I could conceive of them adopting an inner rotating bezel with super-compressor-style twin crowns.

But one glance also tells you that this is far from typical in the dive watch world. That’s the Nomos Glashütte way; its first foray into durable sports watches, the Ahoi, was similarly leftfield. Although really, there’s nothing too controversial about the watch itself; the dial is spacious, with a little personality coming from the “1000ft” notation. The case is what we’ve seen from the Club before; at 42mm I feel like it is pushing at the upper size limit for what works as a Nomos design, especially coupled with the chunkiness of the Club numerals. But that’s the tension at work.

The thing we’re really focussing in on with this watch is the bracelet. We wrote about the brand first adopting steel bracelets when they were announced, and it is no understatement to say it is critical to the success of this watch. Reactions have been mixed across the watch world, and having handled this watch, my feelings are similarly ambivalent.

It looks – to my eye – sleek. It has a faint air of the Spiedel Twist-O-Flex about it, which I didn’t dislike. It’s the way I would expect Nomos to execute a bracelet – aesthetically, at least. And in its construction, attention has been paid to detail; every link is screwed together and the fit is very fine indeed. As for the finish, it is receding to the point of invisibility; a moderate level of polishing with a very faint lateral brushing. It’ll never catch the light in the same way as a Bulgari Octo – which is a fair bit pricier, sure – but it lets the case, which is polished, claim the limelight.

Where it falls down is in the wearing. It’s a total fingerprint magnet, which I can forgive (find me a bracelet that isn’t) but moreover, it is an arm-hair-trapper. Big time. You don’t want to be that guy who trims his wrist hair; this isn’t the only watch that falls foul of this test, but its construction really lends itself to nipping those follicles. I also think – and this is more pronounced on the Tangente Sport models – that the lugs are too sharp, too spartan, and that’s emphasised here in a way that never stood out for me with a leather strap. On my wrist, it wraps around well enough not to dig in, but I could see it being uncomfortable for some. I admire Nomos for continuing to grow its brand and taking a path that sets it apart from others, but if I was buying this watch my first action would be to get it on a NATO strap.

The only downside to that would be closing off the caseback from view. With Calibre DUW 6101 inside, I think the current generation of Nomos watches deserves credit for providing some of the classiest finishing at this price level (I believe it’s improved since I bought my Alpha-powered Orion a few years ago). The ribbing isn’t super-deep or extremely pronounced, but it is smart. The keyless works are well polished and the rotor is sufficiently openworked to let you see most of the movement. Most of all, it deserves plaudits for filling out the case – a benefit of an in-house design, of course – even in the 42mm Club Sport case, it feels sophisticated. So many equivalent watches have a boggo ETA or Sellita with a tiny sapphire window; this is far superior.

That had better mean something to you, because otherwise the price has the potential to be an issue. What Nomos has been doing – investing heavily in its own movements, and innovating along the way – is laudable, but losing its value appeal has been an unavoidable corollary. At £3,220 the Club Sport is a lot pricier than a Longines Legend Diver, Oris Divers Sixty-Five, Tudor Black Bay 41 or TAG Heuer Aquaracer. For the same money, you can look at a Bremont S300 or a Tudor Pelagos but I can’t see anyone tossing and turning over that particular choice; they’re too different.

I can actually see this appealing to someone interested in a Panerai or IWC for roughly half the money. And it’s a hell of a lot more wearable; one of the Club Sport’s real strengths is that it’s only 10.2mm thick. Again, you’ve got that movement to thank – that’s forethought for you.

Perhaps comparing it with other dive watches is a red herring. Rarely have I felt that a watch’s depth rating has so little to do with its overall character. That it can take the pressure is impressive, but purely academic even by the standards of all dive watches – you’re not buying into the typical marketing associations of a dive watch, because size notwithstanding, this watch wears its toughness lightly. You’re buying – what? A Nomos for people with bigger wrists? I can get behind that as an idea, and it’s still expanding the brand’s overall demographic. In which case, I can’t shake the feeling that this is a great everyday wearer rendered difficult to wear by its singular stand-out feature. Buy it, strap it, never look back.