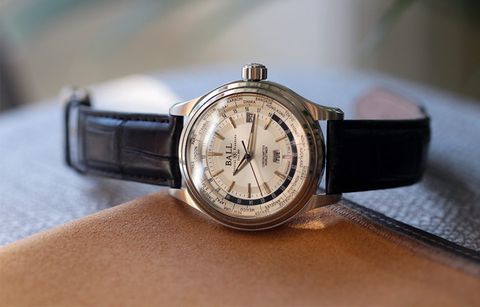 There have been many world timers – significant ­world timers ­– released this year. Patek Philippe, Vacheron Constantin, IWC, Chopard, and Montblanc were among those with them at the core of their big announcements; even De Bethune applied its singular genius to the complication.

However, here’s one that’s flown under the radar since it was revealed at Baselworld, but I’d argue that it deserves some attention. This is the new Trainmaster Worldtime from Ball Watch Company - not a completely new watch, but a transformation of an existing model, from ugly duckling to serious contender. A chronometer with day/date and world time, all for £2,000 on the nose, it’s a pretty impressive package.

Ball produced its first day/date world timer back in 2010, and it also does chronograph and dive watch versions (because you really need to tell the time in Karachi when you're 600 feet underwater). But these have tended towards the aesthetically overcooked - a regular Ball flaw, in my opinion. Here's the old Trainmaster Worldtime: a real stodgy pudding of a design.

However, given Ball’s origins in timekeeping for the American railroads – read about that here – it’s vaguely appropriate that it should have a decent world timer. After all, it was the shambles of running cross-continental trains through a mess of locally-determined time zones that inspired Sandford Flemming, pioneer of the Canadian railroad, to propose standard time zones in the first place – today’s worldwide system of zones offset from GMT being the eventual outcome.

Moreover, Ball's particular knack for adding technical value in a cost-efficient way is well-illustrated in its world timers. Rather than relying on specialist suppliers like Dubois Depraz, it makes its own world timer module (enabling multiple time zones to be read all at once), while also ensuring chronometer status for the movement – that's a lot of watch for the price. It just needed a better design. And happily, now it has it.

The new version of the Trainmaster Worldtime sees Ball exhibiting a bit more restraint and design pragmatism, without loosing the sense of techy detail that’s a Ball characteristic.

The city ring around the outside of the dial is static, while a 24-hour ring, divided into day and night sections, rotates anti-clockwise, allowing the hour to be read in 24 time zones around the world. Both the case and the dial rise and fall in stepped planes, the indications spread out across different levels, and he hour markers siting proud of the bottom level of the dial, bridging an engraved central ring. It's complex, but the whole thing now hangs together pretty serenely, and the watch is very straightforward to read. (As so often, one might wish for a smaller logo on the dial, however.)

The stepped case is a nice vintage-influenced design touch (and one that attracted the admiration of a couple of world-class vintage watch experts I happened to run into while wearing the watch). However, the real advantage of a stepped case is the way it disguises the width of the watch: the Trainmaster Worldtime is 41mm across, but on the wrist it seems smaller. Even with all the steps and relative height due to that complex dial, there's nothing cumbersome about this watch - it's a comfortable wear.

Inside is ETA’s 2836-2 day-date movement, which Ball has fine-tuned to chronometer certification, and onto which it has added its own design of world timer module which keeps which keeps the 24-hour ring rotating anti-clockwise.

According to Ball, this module has actually been upgraded - more efficiency, better tolerances in the setting, greater accuracy. Having not used the previous models I can't comment on the improvement, but setting the world time is very easy and relatively exact, and the watch ran extremely accurately.

As ever with Ball, you also get first-rate night-time visibility thanks to the use of micro-gas tubes placed on the hands and hour markers, instead of SuperLuminova. That means the indications glow all night, thus:

The Ball Trainmaster Worldtime comes in both black dial and white dial versions, on either croc strap or bracelet, and is priced at £2,000.