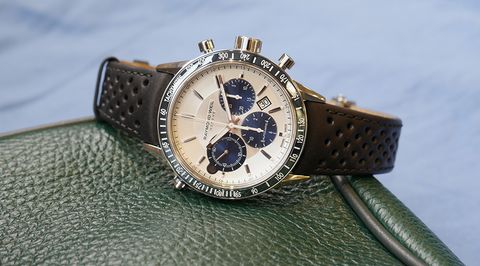 Raymond Weil’s latest addition to its bewilderingly varied Freelancer collection suggests that the Swiss brand, which is this year celebrating its 40th anniversary, has its ear firmly to the ground of current industry trends and more importantly, consumer tastes.

The Freelance 7740 suggests a number of different elements that are currently driving the vintage market and thus also dictating design trends for new watches. For one thing the market for classic stainless steel chronographs is absolutely booming, as illustrated in May by Phillips’ Start-Stop-Reset auction of 88 epic examples.

Nowhere has this been more keenly felt than in the prices paid for vintage Heuer pieces, particularly Autavias and the many panda chronographs offered by the brand over the years. Christie’s Geneva this week achieved £50,000 (CHF 62,500) for a black PVD Israeli Defense Force Autavia from 1985, which is a startling price for a watch just 31 years old.

Raymond Weil’s new Freelancer 7400 is notably more restrained in its use of highlight colours than Heuer was in its heyday but, at its core, it is undeniably a two-tone chrono with vintage leanings. Of course, Raymond Weil has added that crisp modernity and added detailing that it wouldn’t be seen without, but the hair’s-breadth-from-black blue of the sub dials and bezel contrast strongly enough against its steel case and silvered dial to create a striking first impression.

It would appear that the Freelance’s RW5010 calibre is based on the same Valjoux 7753 as Maurice Lacroix’s Pontos S, as both watches feature the same curiously unnecessary quick-date pusher at the 10 o’clock and the same 46 hour power reserve. The extra pusher doesn't make a lot of sense from a practical point of view, and if (like us), you're not a read-the-manual type, you'll spend a little while wondering why the crown only has one position when you want to change the date. But it does give the watch a little something extra in terms of a "technical" appearance, and from a usability point of view it does actually make it easier to change the date with the watch on your wrist, if that's something you do a lot of...

There are also two less traditional versions of this Freelancer, which pit prime colour highlights against a black blackground in the same manner of the Maurice Lacroix. Either way the Raymond Weil comes in several hundred pounds cheaper than its sportier rival.

If one were to level any criticism at the design it might call into question a degree of fussiness on the dial. The circular tracks beneath the hour markers, the oddly screwed down small seconds frame at the nine o’clock position (something we also saw on the Freelancer Piper Pilot from earlier this year) and the cramped ‘Automatic’ lettering on the register at six o’clock.

But these are minor points on what is a very confident chronograph and something we are seeing more regularly from Raymond Weil. Along with the aforementioned pilot's watch (the brand's first), we've also had the launch of a diving watch, the Freelancer RealTeam (it's in association with the RealTeam sailing team). Raymond Weil is getting sporty at long last, and tapping into the zeitgeist in a way it has previously not quite managed.

The Freelancer Chronograph is priced at £2,295.