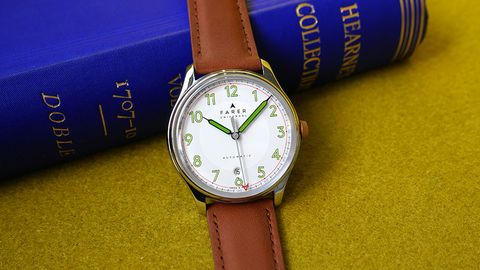 Farer launched in October 2015 with a range of quartz pieces - the flagship being a GMT model - that added weight to the idea that in the sub-£500 market, the fashion watch was dying out at the hands of more design-oriented brands (see Uniform Wares et al.).

What Farer brought to the scene was an unabashed use of bright colour, and a goodly helping of generically "British" design traits. The idea was beginning to feel very familiar a year ago - the likes of Schofield had been exploring that look at a higher level for some time - and in the intervening time a trickle has become a stream, with Sekford, Shore Projects, Dennison and of course the re-branded Christopher Ward all contributing from different directions.

Farer's quartz pieces showed that something was definitely right - the use of colour could be a bit much in some cases (look up the Carter and Frobisher II) - but crucially a lot of the attention to detail was there from the off. We knew that when the automatic versions came along, they'd be worth a look. And here they are.

From left to right: “Endurance”, “Beagle” and “Hopewell”
Courtesy

There are three versions making their debuts, entitled "Beagle", "Hopewell" and "Endurance" (honestly, between them, the various British brands will soon run out of ships/coastal towns/explorers). They're powered by ETA 2824-2 calibres: very little to say about this well-known movement other than to note that Farer has chosen/been able to source ETA rather than Soprod, Sellita or A.N.Other calibre. Certainly at the price it's very decent; there are a lot of watches out there running on the same tractor with four-figure price tags.

It's really all about the design with Farer (as an aside; we can't shake the feeling that as the industry hunkers down against the harsh winds blowing its way, it will be all about design for a lot of brands as movement innovation gets placed firmly on the back burner). What you're looking for at this level is anything that tells you the maker thought twice, or three times, about their choices - and luckily, there are several such points.

The bronze crown is one. Simple, small, but a nice nod to watch-nerdery and simultaneously a tick-box for the British/naval/explorer vibe that Farer touches upon now and again. Another is the pipette hands; particularly in the Beagle they give the watch a scientific, instrument-inspired style.

Other design choices will please some but not others - the big arrowhead on the (very long) seconds hand, for example. Easily mistaken for a GMT at a glance. And the way the date window takes a huge chomp out of number six. But at least they are design choices, made deliberately. And in the date window's defence, it's small, cleanly cut, round not square. It would be nice if on the blue-dialled Hopewell the date disc could come with a matching blue background, but I feel harsh quibbling over such things at £875.

The dial design in general is really impressive. All three watches have distinctly different dials, down to the use of dots or lines for the minute track, Arabic numerals all the way round or alternate numbers, and a better balancing of colour than in the quartz pieces that says these are ever so slightly more grown up.

I could go on: the logo isn't too big; there's no abundance of dial text; the dials have a subtle two-tone finish that's not strong enough to be called pie-pan, but it's going that way. Pie-plate, perhaps. The domed sapphire - a custom component, we're told - is sufficiently old-school without actually landing the watches in faux-heritage territory.

On the back, there's not a great deal to write home about; sapphire casebacks show a custom-etched rotor and a little bit of brushing on the bridges. Again, you get what you pay for and there's really nothing wrong with how this looks. 50m of water resistance is enough for the type of watch.

The straps (which are very comfortable Barenia bridle leather) are removable with quick-release bars; I would have preferred standard spring bars to enable easy swapping of NATO straps, something these watches are crying out for, but it's not a deal-breaker. At 39.5mm wide and 10mm tall, the watches are pretty perfectly sized, and actually feel like they wear a little smaller, which is no bad thing.

All said and done, Farer's autos balance a sense of fun with features that more seasoned watch buyers will respect, making them either a credible entry-level buy for a first-timer or a quirky daily wearer for someone who only brings out the Panerai on special occasions.