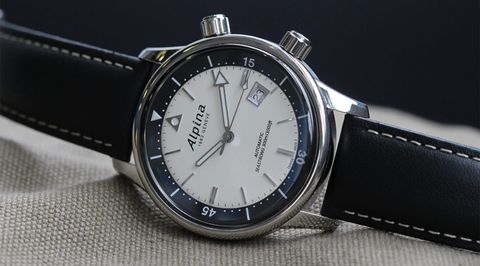 Here’s a quirky and actually rather charming addendum to the litany of retro dive watches washing up on the watch world’s shoreline just now. We came across it at Baselworld in March, where it was presented as a kind of afterthought to Alpina’s colourful new range of automatic divers, the Seastrong 300 collection. Those are perfectly respectable, all-action pieces, but it was the much-less sporty, vintage-influenced Seastrong Diver Heritage that hooked our attention. So we called it back for a closer look.

Alpina, you may know, is owned by Frederique Constant; unlike Frederique Constant, it specialises in sports watches and chronographs (think of it as a kind of entry-level IWC); also unlike its sibling brand, it’s a historic marque dating back to the late 19th century, which means it has an archive of old designs to draw on.

The Alpina 10 was a minor member of the “super compressor” club of 1960s dive watches, which used a brilliant case design from a firm named Ervin Piquerez SA (EPSA). It built a nifty spring mechanism into the screw-down caseback, enabling the case to compress further as water pressure grew (improving depth resistance), while relieving pressure on the gasket away from the depths, and prolonging the life of the watch.

The truly recognisable feature of the super compressor case, however, was the presence (on the majority of models) of two crowns on the right flank of the watch – one to set the hands, one to rotate an internal dive bezel. It’s what gives plenty of vintage divers from the era – think old IWC Aquatimers, or the near-mythical Jaeger-LeCoultre Polaris – such a streamlined, action-ready look that's so evocative of the era. It's dead cool.

Longines is one of few modern watch companies to have resurrected the super compressor style, with its marvellous Legend Diver (above); and now we have another contender. The look of the Seastrong Heritage Diver is less energetically charismatic than the Longines, for sure, but it has plenty of interesting traits drawn from the original Alpina 10, and character of its own.

The Alpina Seastrong Diver Heritage is 42mm across – rather bigger than the original (as you’d expect), but not excessively huge for a contemporary sports watch. It’s depth rating is a healthy 300m/1000 feet (the same as the Seastrong 300 watches), and its automatic movement (ETA or Sellita-based) has a 38-hour power reserve. Its screw-down caseback (not of a specific super compressor construction these days) is heavily engraved with the Alpina logos in relief.

Besides the two crowns, the Seastrong Heritage’s defining attribute is that inner bezel, which inclines down towards the dial at an angle.

There’s a black dial version of the Seastrong Heritage, but it’s the black/silver model that hooked us when we saw it. The contrast tonality has the same kind of primal, meaty appeal that you get from a panda dial chronograph, and is strikingly different from what we generally see in watches today. It’s what hooked us immediately when we first saw this watch.

Go in close, and you notice further details lifted from the original Alpina 10, in particular the outsize arrow on the hour hand and the trapezoid date window. Now, these are things that I’d normally expect to find pretty irksome (at QP, we stand behind no one in our dislike of unnecessary date windows in particular). And yet, in this watch, for me they just… work. Really.

The date has been swivelled off the 3pm spot, where it is on the original, but even that doesn’t jar with me in the way I’d expect it to; and the trapezoid shape of the window, just like that large arrow hour hand, along with the 12pm triangle-with-a-hole (an Alpina symbol) just add up to a kind of quirky coherence. As I said, it shouldn't work, but for me it does.

There are, inevitably, compromises. Compared to the elegant logo on the 1967 original, the fat, modern Alpina insignia is obtrusive, though that’s hardly a problem unique to Alpina; only the hands and the arrow on the internal bezel are lumed – for a true dive watch, you’d expect the hour markers to light up too; the two crowns are a little too small for the super compressor design, and are finicky to use, especially - one imagines - in water.

But if you want a true dive watch from Alpina, a redoubtable tool for the deep, this isn't it. There's the Seastrong 300 for that. The watch here, in truth, is not even a light snorkel watch, whatever its depth rating, and whatever its historic background; it’s too smart. Its case is curvy and polished, unlike the sharply utilitarian cases of the old supercompressors; it’s on a stitched leather strap for heaven’s sake.

Actually, if ever a watch was crying out to be put onto a textile strap, I’d say the Alpina Seastrong Heritage is – but it still won’t be a diver. However, as a basic, everyday beater, I think it’s a rather stylish contender. It’s glossy enough to wear with a suit or blazer – more so than the rugged Tudor Black Bay or Oris Divers 65 – but it has off-beat charm and unusual details on its side too. Certainly, among Alpina’s mostly workaday collection, it’s quite the stand-out.

The Alpina Seastrong Diver Heritage is £1,350.