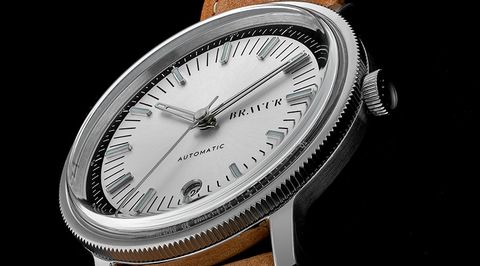 There’s a stark contrast between the Bravur watches of old (we say old, they were founded in Sweden in 2011) and their latest, the BW003.

Most noticeable is the inclusion of an automatic movement, the Sellita SW300, as this is Bravur’s first mechanical watch. But what I find more interesting is the difference in the standard of design between this automatic and the brand’s quartz models – which take solid, raised indices and numerals as a house style.

There’s nothing wrong with Bravur’s simple quartz pieces, but the BW003 is so far ahead of them in terms of how accomplished and confident the final design is, it’s somewhat startling. Of course, the automatic is considerably more expensive than its quartz predecessors and that no doubt also pays for more fine detail and fine tuning.

Bravur has opted for a mid-century design style but, rather than plundering tired tropes from existing vintage watch design of that era, the brand has instead taken the far more interesting approach of creating its own ‘vintage’ watch style based on the wider styles of the 1950s, evoking everything from furniture, architecture, cars and graphic design. Essentially, this is how Bravur might have designed a watch had they existed at the time – but with the added benefit of hindsight.

In that regard, the Bravur is a roaring success, it looks like something Don Draper would have strapped on in early episodes of Mad Men and drips just as much period detail as the glorious sets of that series.

The 39mm stainless steel case hits something of a universal sweet spot, big enough to have impact and yet small enough not to be imposing and, while the case is fairly thin, the glassbox sapphire crystal adds scale without any added density and all of the light flowing in from the raised crystal also serves to flood the dial with natural light aiding legibility.

The coin edge bezel diffuses the watch’s silhouette and pulls the eye to the dial, which is a combination of raised, polished batons, infilled with luminova with printed minutes/seconds in between on the black central section of the dial, and a smaller, half-second track around the silvered periphery (it is worth noting there is also a version with silver dial and black half-second track). A discrete round date window with polished bevel sits at the six o’clock atop a shorter baton, while the skeletonised hands are tipped with SuperLuminova.

Flip the watch over and the neatly finished Sellita is revealed with its custom Bravur rotor and the brand name printed in gold on the sapphire crystal caseback. And then there’s the strap, a gloriously soft, vegetable tanned leather strap which develops new patina day after day and has the feeling of something that will last a lifetime, even if the deployant clasp securing it does not.

At present Bravur’s website is the sole point of sale where a slightly confusing pricing strategy is implemented with sales made in US Dollars (1,350 of them) but EU sales for some reason attract a 25% VAT rate.

The Bravur BW003 is a triumph of proportion and good design. It has spent a couple of months (including the duration of our Baselworld stint) on my wrist unopposed. It doesn’t shout but instead quietly convinces others of its worth through fine detail in a very restrained Scandinavian manner.