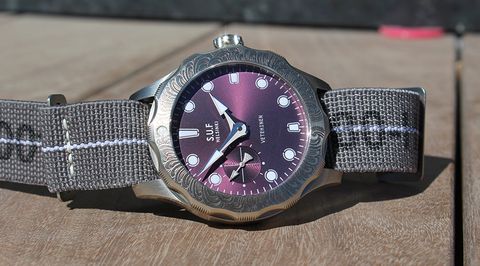 Though you might not have realised, SUF Helinski has actually existed just as long as Sarpaneva Watches itself. Stepan’s more utilitarian and approachable sister brand has a very austere yet interesting design aesthetic, which according to Stepan was designed to be distinctly Finnish. Though the brand remained very under the radar for quite some time, more recent creations like the Vetehinen seen here have started garnering the brand some significant international praise. Having always had a soft spot for dive watches in general, and also being a fan of all things Sarpaneva, when the opportunity for some hands-on time with this special edition of the Vetehinen came about there was no way it could be passed up.

Produced in a limited run of only 25 pieces, the Vetehinen Mo Coppoletta is a rare bird to say the least. Stepan first crossed paths with the famed tattooer and watch collector back in 2012, and before long the idea of a collaboration was destined to come to fruition. Stepan has been tattooed by Coppoletta, with a design of his iconic moonphase complication adorned with a crown that mimics the layered cutaway dial design found on many Sarpaneva watches. In the case of the new Vetehinen, the tables have been turned, and Coppoletta’s unique design work has been thoughtfully applied to Stepan’s otherwise task-centered creation.

All told there are three key design details setting this piece apart from its standard-issue counterparts. First and foremost, its engraved bezel is the centerpiece of this collaboration. The wave pattern featured is one quite common in the world of old-school tattooing, and it translates nicely to its placement on the Vetehinen’s bezel. First laser-engraved and then finished by hand, the finished product is still smooth to the touch, yet cut deeply enough that it does not appear too light or lacking in substance.

Next on the list and equally if not more eye-catching is the Vetehinen’s vibrant purple dial. The galvanic colored dial has a subtle radially brushed finish that catches the light beautifully, and is nicely contrasted by its crisp white indices. As with all things launched by Sarpaneva, the hands of the Vetehinen — which are the same as those found on non-limited models — are nothing short of fantastic. Dubbed either harpoon or “devil-tail” hands, a split of microblasted and high-polished finishing immediately draw the eye to admire the craftsmanship involved in their creation, where you’ll hopefully catch a glimpse at the current time while you’re at it.

Another particularly unique detail that comes with this Vetehinen is a leather Nato strap made of a combination of deerskin and salmon skin. That’s right, deer and salmon — how very Finnish. The unorthodox strap choice is a comfortable one, but more importantly it’s a surprisingly perfect match for the case, dial and engraved bezel combination. The scaly texture of the salmon skin has just the right level of detail to complement the bezel engraving (think of the delicate art of combining patterned clothing in a single outfit—challenging but not impossible). Its neutral grey hue is also an ideal match to the Vetehinen’s brushed steel case, keeping the strap from distracting from other design elements of the watch itself. Sadly our review unit didn't have this strap equipped - you can see it here, and there are a few pics out there in the wild.

Retaining a focus on value, the Vetehinen is powered by an Eterna caliber 3901A, rather than the Soprod A10 which is the usual go-to for Sarpaneva watches. This Eterna caliber has found favour amongst a number of indie brands of late, as the 4Hz self-winding movement has proven quite reliable thus far, and delivers a significantly higher power reserve than current standard offerings from the likes of ETA and Sellita. A 65-hour power reserve drives its hour and minute hands, as well as a small seconds subdial at the 9 o’clock position. The caliber is rhodium plated, though not finished with any elaborate or grandiose detail—further speaking to the Vetehinen’s purposeful construction. The through-and-through strap means you won't see a lot of the movement in any case, although it does have a display caseback.

On the wrist this is by no means a compact watch, however that’s not a bad thing. Measuring 42mm across and 13mm thick, it hugs the wrist nicely, especially when paired with the light grey Erica’s Originals strap seen here. The strap is available as an option with most (if not all) SUF divers and having given this one a fair bit of wrist time, it would easily become my go-to option. Given its reasonable case thickness, the addition of a layer of strap material behind the Vetehinen’s caseback does not cause the piece to sit too proud off the wrist — sometimes a concern with NATO-style watch strap pairings.

Though the Vetehinen Mo Coppoletta has become tougher and tougher to come by by the second, fans of the Vetehinen aren’t entirely out of luck. As we were setting off for Baselworld 2018, we learned that more new funky colors are coming to the line, meaning if you can’t locate this example there may well be another option out there that might tick all the boxes for you.