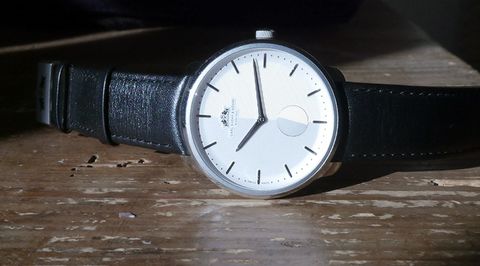 We talk a great deal about modern watch design here at QP - no doubt as a reaction to the proliferation of ‘heritage-inspired’ models we see week-in and week-out - and ponder how the current era will be viewed in years to come when so many new watches reference previous decades.

Of course the independents tread their own idiosyncratic paths, brands like MB&F, Urwerk and HYT produce unique – and thoroughly modern - watches but these are esoteric rather than mainstream designs; exceptions rather than the rule.

My own take is that some watch brands leverage their heritage so heavily that they find it difficult to make a break with tradition and say something new. Too many are beholden to the past.

Perhaps it takes a new brand to say new things. Carl Suchy & Söhne is just that despite, rather ironically, taking its name from a 19th Century clock and pocket watch maker with roots in Prague. Rather than attempt to reference the pieces of that time the new company, founded by Austrian entrepreneur Robert Punkenhofer, has wisely given itself some creative freedom and unleased a young team to forge a new identity.

The language or codes used to create the brand’s debut, the Waltz No 1, feel familiar and yet their arrangement is quite different from what we have become accustomed to. Fine dress watches, a category the Waltz No 1 certainly fits, are usually housed in polished cases and, while this remains true for the front-facing surfaces of the Waltz, all of the edges are finely bead-blasted for a soft, diffused finish.

This diffusion continues with the case shape, there’s not a straight line in sight, even the usually abrupt junction of lug and case has been smoothed off to the softest curve. The only protrusion is fairly simple round crown, knurled for better grip with a black lacquer cap. This is a traditional, familiar form translated using modern design sensibilities.

The brand really steps out on its own with its dial design though; the shimmering silver/white face, which rises gently at its edges, is bisected from 12 o’clock to six o’clock positions. The left half is decorated with vertical grooves, the right horizontal. Where a traditional small seconds sub dial would normally sit, a disc appears to have been hewn from the dial, pattern-and-all, and set in rotation as a running indicator. It’s a neat concept as the angles of the two perpendicular sets of lines change with each passing second as they move through each sector.

The dial is set (and indeed offset) but highly polished metal applique indices, tiny round dots for the minutes and rounded batons for the hours. Perhaps the overall design would benefit from those appliques sitting just a fraction of a millimetre higher above the dial’s surface but I don’t dislike it as it stands. It also seems to have taken someone from outside of the watch industry to identify the proper proportions for dial lettering although I would like to see a version without the dominant coat of arms sitting on top (and it has no place on the deployment clasp either). The only element of the entire watch that I’d like to see reworked are the hands, which are neither one thing or the other; an amorphous form which are crying out for definition.

Inside, a Vaucher VMF 5401 unidirectional micro-rotor automatic beats at 3Hz and offers 42 hours of power reserve. The bevelled edges of the movement’s bridges have been hand-polished and a sunray pattern of striping radiates out from the centre of the balance wheel to great effect.

The Waltz No1 is an incredibly accomplished debut from Carl Suchy; the design is fresh and modern and refuses to pander to tradition. But there's that name, suggesting something old-fashioned, archaic almost. While it is undeniably formal, if a touch too large for a pure dress watch, as a design it’s much more forward-looking than that implies. A modern spin on an old idea - so does that make this the Strictly Come Dancing of watches? The model has now been released with a semi-skeletonised dial that really labours the cross-hatched theme, so it seems like the answer is yes.