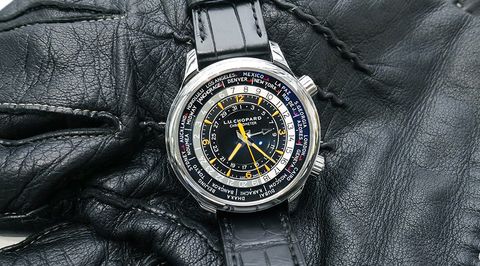 Let’s face it, though we at QP do love a good world time watch, their design can lead to criticism from even the most easy-going watch enthusiast. Legibility, ease of setting, and proper management of visual clutter are but a few pieces of the puzzle that will instantly make or break a good world timer. When Chopard unveiled the L.U.C Time Traveler One, offered in platinum, rose gold, and the steel example seen here, we were instantly smitten. From an aesthetic standpoint the Time Traveler One instantly ticked all the boxes, prompting a closer examination after a bit of time on the wrist.

Starting with the visual appeal, the most distinctive design choice from this Chopard release is the use of a couple of vintage-inspired elements, most notably the compressor-style crown configuration at two o'clock and four o'clock. Chopard is not one to dabble in retro design (with the exception of one or two Mille Miglia models), yet it comes across totally naturally here when balanced against a more modern colour palette - and the conscious decision not to include a world map of any kind.

The typeface chosen for its 24 time zone cities invokes a spirit of travel, bearing a resemblance to that often seen in cartography of decades past. To be fair, the black and orange colour combination on the steel model took me a bit of time to warm up to. While reasonably legible, the off-white dial of the rose gold model, and the teal seen on the platinum model would no doubt sell remarkably well if offered in this “entry level” steel model.

The other big win for the Time Traveler One for anyone with an eye for vintage is its compressor-style case. While not a diver by any stretch (rated to only 50m of water resistance), the casing choice works perfectly from both a visual and functional level. Time and date setting is handled by the crown at two o’clock, stamped with an L.U.C logo, where as the four o’clock crown labeled with a globe handles the setting of the city disc when on the go. Measuring 42mm across and a reasonable 12.1mm thick, the Time Traveler One sits very comfortably on the wrist, and strikes a good mid-point to accommodate both smaller and larger wrists without being overpowering, nor underwhelming.

As with all things Chopard, the Time Traveler One doesn’t sell itself on visual appeal alone. Beating away at 4 Hz, the L.U.C 01.05L self-winding caliber is of course fully developed and manufactured in-house by Chopard. The caliber is chronometer certified, and offers a power reserve of 60 hours. While not a dealbreaker for many, it’s worth noting that this power reserve figure beats at least two of its closer competitors out of the water by a decent margin. The JLC Geophysic Universal Time and Montblanc 4810 Orbis Terrarum by comparison deliver a power reserve of 40 and 42 hours respectively.

In terms of apples-to-apples comparisons, debating the Time Traveler One versus the handful of other players is a tricky game. From a dollars and cents standpoint the Geophysic World Time is the Chopard’s closest rival, though it trades a date indication for dead-beat seconds, and carries a much dressier and more classical aesthetic. At a more equal level in terms of casual wearability and quality of finishing, the Vacheron Constantin Overseas World Timer is an obvious contender, however other factors push the Overseas a reasonable way over budget (priced at £34,700).

The interesting thing about the world timer category is that, unlike more standard complications, playing the side-by-side comparison game isn’t so relevant. By the time you’re in the market for a world time, odds are you’re looking at it being at least the second (if not the fifth or sixth) watch to add to a collection. By then a level of appreciation has developed for particular brands, design styles, and other subjective details, leading the path to a world timer to a much more personal decision, rather than running through and ticking boxes off of a list. That said, at least at a personal level, the Chopard Time Traveler One makes quick work of ticking many (if not all) of said boxes.