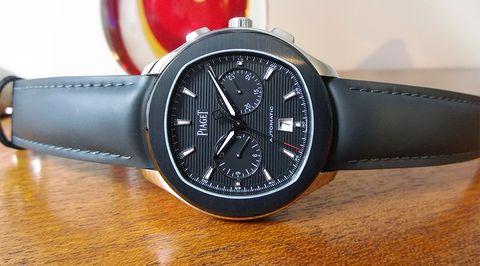 Back in 2017, and with little fanfare, Piaget announced the expansion of its Polo S model range that it had initially refreshed in 2016. The media frenzy the initial launch has created was long over, and the impression left by the way this expansion was handled was that Piaget wasn’t in much of a hurry to refuel the grand debate about design comparisons and similarities to Gerald Genta creations that ran rampant in the collector and enthusiast communities.

What’s unfortunate - in that context - is that this latest, and quite different iteration of the Polo S distinguishes itself even further from those past Genta comparison points, and having spent a bit of hands-on time with the piece it’s easy to argue that this newest Polo S Chronograph is hands-down the most versatile in the collection.

While its case dimensions, materials, and inner workings remain largely unchanged, two relatively small tweaks to the new Polo S make all the difference, starting with its black ADLC-treated bezel. Horizontally brushed to match the striping of its dial, and finished with a high polish beveled edge, this new detail gives the piece significant contrast—not to mention giving the piece the look of wearing slightly smaller on the wrist that its plain steel siblings.

A red-tipped chronograph seconds hand adds a subtle yet rather sporting touch to the new model as well, appearing prominently against its black horizontally striped dial. Like its siblings, the subdials of this Polo S chronograph are surrounded by a thin polished silver ring. All told, even in such dark guise this piece catches and reflects light quite well, making it one of few watches that is both understated and attention-grabbing all at the same time.

The other relevant change of pace with this latest Polo S chronograph is the fact that this is the first time we’re seeing the watch offered without a bracelet. Offered on either a leather or rubber strap (the latter seen here), this detail further adds to its status as an ideal casual-wearing sports chronograph. The rubber strap is just an appropriate thickness to match the thickness of its case, and though a bit stiff on first arrival, it quickly softens with wear. A rubber strap isn’t always relevant when discussing watches of this caliber — this particular model prices out at £12,700— but its 100m water resistance ensures it will make a fine travel companion, even if you decide to hit the pool.

Thankfully the motive power behind this new update remains unchanged as well. The elegantly finished 1160P self-winding caliber, delivering a 50h power reserve and manufactured at Richemont's "in-house" manufacture ValFleurier for Piaget, is showcased here via an exhibition caseback. Piaget’s impeccable finishing never disappoints, and this calibre is executed with Cotes de Geneve finishing throughout. An added change for this black variant is the use of an anthracite finishing on its rotor, which adds a fitting visual complement to its other aesthetic changes.

After a reasonable amount of wrist time with the Polo S chrono, it quickly became a bit of a go-to regardless of my anticipated environment. As much as it ticks all the boxes for the casual day-to-day, its slender profile and elegant proportions made it equally comfortable when a shirt cuff or even proper suiting was required. Though many still think a Rolex Submariner is appropriate wristwear when wearing a suit (heads up, no it’s not), the Polo S is perfectly capable of managing both ends of the pendulum swing — more so than countless sports watches in the market right now.

This is the point Piaget is continuing to hammer home with the Polo S line, and beyond a doubt they’ve made their point. While this is not an entry-level watch in the grand scheme of things, there are so many details where you can see the value in execution versus its asking price, before you even start examining its bonus points for versatility. The final point that really drives this all home is the fact that Piaget decided to limit these black bezel models to 888 pieces worldwide, all while keeping pricing below the standard models (although as you can't buy the other Polo S chronographs on anything other than a steel bracelet, the price is about what you'd expect: £12,700 in comparison to £13,200).