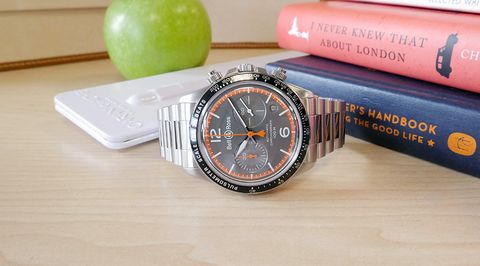 We all know what Bell & Ross makes: square-cased watches with rubber straps, a big raised bezel and a Parisian take on the classic pilot's watch dial - smart typography, big sword hands and most of the time, all in black.

So, hold on a minute - what's this? It turns out Bell & Ross spent a lot of 2017 trying to show the world it makes a lot more than the BR-01 and its derivatives (nothing wrong with them; we put the BR-01 in our list of the best post-1990 watch designs). We had the Horolum and Horograph, and some slightly less surefire hits, including watches with inlaid veneer cases. But the point is: Bell & Ross makes a whole host of good-looking everyday tool watches, and they're often overlooked.

This right here, the BR V2-94 Coastguard, is one of the best. Don't ask me to explain the logic behind the numbering system, but the name is pretty straightforward: it's a tie-in with the French coastguard (or Gardes-Cotes, if you prefer) who rock this pretty chic slate-grey-with-coral-orange colour combo as they go about their daily work. Naturally, per the marketing materials, the watch has been created to cater to the needs of the men and women who guard the coasts - so there's a pulsometer scale around the edge for taking heart beat readings, and 100m water resistance as well as optional rubber straps.

Let's be honest though, it has more accurately been created to meet the needs of gents who fancy a slightly more interesting looking chronograph than your standard Speedmaster or Carrera - hence the sapphire caseback, not something you'd spec if your daily grind involves hanging out of helicopters. Said sapphire comes with an anchor logo too, just to keep the marine influences coming.

It's a good size at 41mm, and its outdoorsy credentials are burnished by the presence of screw-down pushers and a screw-down crown. Stylistically they're a matter of taste; I like them and even if I was only going to wear this to the office and back, I'd enjoy fiddling with them - that's at least 50 per cent of the point, right? Design-wise, I'm a fan of the details: the faintly mil-spec handset, with the arrowhead counterweight on the seconds hand; the crosshair design on the small seconds counter at 3 o'clock; the colour-matched date.

At a glance, you might take it for an old Omega Speedmaster Racing - not a bad thing; maybe one of those Japanese limited editions that there seem to be a never ending supply of. The strike against Bell & Ross when it moves away from its staple square designs is that its watches start to look a little bit like other brands' - and while there is an element of that here, I feel that the colour scheme saves it from being too generic.

The other strike against B&R is that they don't tend to compare ever so well on price with their rivals. The BR V2-94 chrono is £3,600 on a steel bracelet (£3,350 on the rubber), and for once I think it's more or less on the money. Admittedly, the movement inside is a ETA 2894-2 so that's nothing to get too excited about, but you have to ask yourself how much you care. At this price, your movement isn't hand-finished, it's assembled just the same, and it's no less reliable. Some would say more.

For me, the Bell & Ross is smarter and more appealing than the dated Calibre 16 Carreras from TAG Heuer, which run about £3,750 (I'm assuming if you're shopping for this, the chunky, openworked Calibre Heuer 01 isn't for you). It can't compete with the Speedmaster Moonwatch Professional (£3,520) on pedigree but the splash of colour does give it more personality. It's on a par with the Montblanc TimeWalker Chronograph in many ways - near-identical price (£3,680 for the TimeWalker), similar reliance on third-party movements - but to look at, they're chalk and cheese. I think the most compelling alternative - and how often do we find ourselves saying this? - is from Tudor. The Heritage Black Bay Chrono, at £3,610 with "in-house" movement (and not just any in-house movement but the same one you pay a lot more for if it comes with a Breitling badge on the dial) is the one that could give this a really strong run for its money.