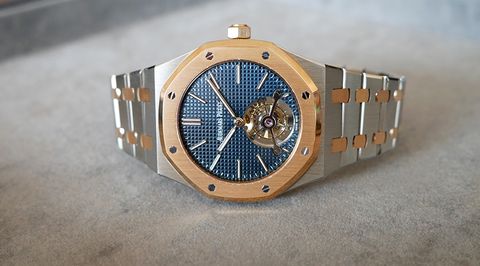 It takes a steady hand to mess with the classics. Not many people would question the definition applies to Audemars Piguet’s Royal Oak (here in Tourbillon Extra Thin form). And what we have before us is a non-standard version - but it might take you a little while to spot why.

The Royal Oak Tourbillon Extra Thin isn’t a watch we’ve covered on SalonQP in any great detail before, so an introduction is in order. At 41mm across, it is 2mm larger than the time-only Royal Oak Extra-Thin ref.15202 (also known as the Jumbo, and prized as the purists’ choice of Royal Oak because, true to the original, it omits the seconds hand).

Is it extra thin? It measures 8.85mm from bezel to caseback, which compares favourably with the standard 41mm Royal Oak automatic (9.8mm) and gets close to the 8.1mm of the Jumbo. Which is fair enough when you have to fit a tourbillon in amongst things as well.

The tourbillon itself is shown through an aperture at 6 o’clock, cut clean through the tapisserie dial and held in place by a solid, almost sturdy bridge. What little of the movement - including the tourbillon - that you can see from here is all beautifully finished, with circular graining on the wheels, mirror-polished bevelling on the tourbillon bridge and cage and a couple of tightly-countersunk synthetic sapphires gleaming out.

This watch exists in a number of styles - you can have in stainless steel with a blue or black dial; in platinum with a grey or blue dial (the latter a boutique-only limited edition that flies under the radar somewhat by coating all visible wheels including the balance wheel to match the case; no brass or gold to be seen) or in yellow gold or rose gold.

Both colours of gold can be spiced up even further with a diamond-set bezel, and are offered with solid gold, black or blue dials. Last but not least, any of the above metals can be had with a totally openworked dial, featuring stark ruthenium-coated plates and bridges.

You will have noticed mention of blue dials in that list, so what’s special about this watch - isn’t it meant to be a Bucherer Blue Edition? Well, it is that, but in this instance it’s not the dial that’s unique per se; it’s the case and bracelet metal. This is the only Royal Oak Tourbillon Extra Flat to be produced in the combination of rose gold and steel. And in fact as you can see from the pictures, the blue is a little darker, and from some angles more subdued, than you might expect.

That’s not to say it’s not sufficiently appealing - far from it. This is one of the few Blue Editions to be explicitly limited in production number (20 will be made) due to the complexity of the movement. A rare Royal Oak, especially one this good looking, is a compelling proposition indeed. It retails at £124,900.