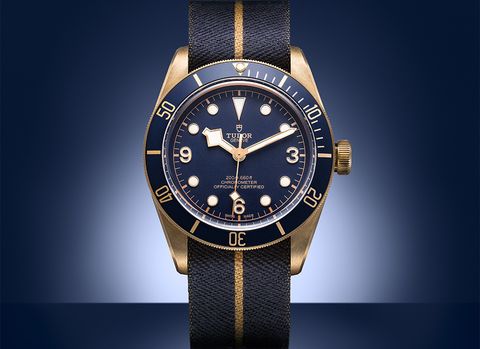 We have before us two very well known watches indeed. The Tudor Heritage Black Bay Bronze and Panerai Radiomir 1940 need little by way of introduction - they are cornerstones of their respective brands' ranges and firm favourites with the watch cognoscenti.

They have in common a strength of design that lends the watches a great flexibility; both derived from historic diving watches, they combine simple, strong lines with highly legible dials. The Radiomir 1940 achieved icon status many years ago, and the Black Bay is fast headed in the same direction. That essential simplicity, and the flexibility it gives has led to a whole host of different Black Bays and Radiomirs, and it is the reason these watches are here.

"Here" is the boardroom of Bucherer 1888, in Lucerne, and these watches are here because they are part of the Bucherer Blue Editions range - the largest selection of officially sanctioned custom watch designs in the world. Using its status as Europe's largest Swiss watch retailer, Bucherer has developed relationships with several of Switzerland's biggest brands, and worked together on special editions of Bucherer's signature approach is the introduction of a rich, dark royal blue, and the effect is deeply impressive.

Sure, we are used to seeing fresh dial colours on popular watches all the time, and superficially there is nothing different here. But a lot lies in the judgement and the execution. Take Tudor's Heritage Black Bay for example: Bucherer could easily have worked with the standard model and given it a blue dial - but instead, it picked out the bronze version of the Black Bay, already a cult favourite, and went to town.

The depth of the blue with that warm bronze is the main thing – it will undoubtedly look awesome after a couple of years of patinating. It’s also special simply because Tudor doesn’t normally produce special editions.

The cream snowflake hands (taken from Tudor watches used by the French National Navy in the 1970s) and indices also work well with the new colour scheme. It gives the watch even more of a nautical feel than the original Heritage Black Bay Bronze, which relied on a chocolate brown and olive green colour palette. In fact, the whole thing puts us slightly in mind of an admiral’s dress uniform.

The pairing of blue and bronze tones is echoed in the Panerai Radiomir 1940 as well, where the signature sandwich dial construction reveals the yellowy-brown luminova numerals in that ever-so familiar Panerai typography that can trace its roots right back to the second World War.

The watch, which uses Panerai's in-house automatic calibre P.4000, has a vertically brushed dial in Bucherer blue, which, just as with the Tudor, serves to emphasise the watch's nautical roots. Otherwise identical to a standard issue Radiomir 1940, it nevertheless underlines the versatility of the blue edition project. On the wrist the colour really shines out, elevating it above the normal model.