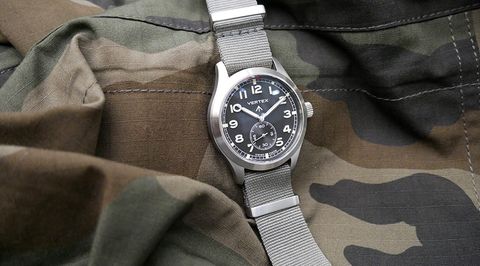 The name Vertex will quite probably be known to many of you: it was founded in Hatton Garden, in London, in 1916 and first rose to prominence as one of the 12 manufacturers selected by the Ministry of Defence to provide "Wrist, Watch, Waterproof" watches to the British military during World War 2. (As an aside, you may not know that the company's premises in Hatton Garden were destroyed by bombing in 1940, but Vertex's Swiss factory fulfilled the order for 15,000 field watches.)

After the war Vertex began importing Revue Thommen watches to the UK (it had previously acted as a distributor for Movado as well) and in 1956 began to co-brand its watches Vertex Revue. This continued for nearly 20 years, with the brand establishing itself as a mass-market watch with a particular popularity among companies giving long-service gifts to employees (I have just one such watch, handed down from my grandfather). In 1972 Vertex closed its doors, under pressure from the emergence of quartz watches.

Last year the brand was revived (by Don Cochrane, great-grandson of the original founder Claude Lyons) and presented an intriguing take on Vertex's most famous watch: the Calibre 59 that was one of the Dirty Dozen. I've spent a couple of weeks with this watch, during which time it has rarely left my wrist; there's plenty to say about the watch itself, to say nothing of the overall proposition being put forward by Cochrane, so let's get to it.

First off, I'm on record as being a little disillusioned by revivals, retro watches, throwbacks and the whole new-heritage movement as a whole. I find it a touch unimaginative from the big brands, although that's not to say there aren't a lot of good looking watches appearing as a result. I have little doubt that without the climate that has been created by everyone from Omega and TAG Heuer to IWC, Rado and even Patek Philippe, there's no way this would have happened. But there's also little doubt that this was the right watch to start with. Yes, it's the obvious choice, but that's not always wrong.

My first impressions of the watch itself were mixed, and it comes right down to the watch's signature feature: those three-dimensional luminous numerals. (I'm claiming the term "Luminals", if any brands are interested.) You can't miss them, because they're basically all that has changed from the original 1940s design. And because that design is so familiar, this at first felt like a real clash of styles: something cartoonish in a serious space. Honestly, they reminded me of glow-in-the-dark dinosaur skeletons I played with as a child.

Otherwise, the dial is commendably straightforward. The sub-seconds dial is as big as possible - something Cochrane felt was important - and of course you have the crows-foot marker below the logo that denoted government property (also known as a "pheon"). There's a railroad minute track with flat luminova dots and double red dots at 12 o'clock. The whole package is housed in a plain, lightly-brushed 40mm steel case with no crown guards, and under the dial is a top-grade hand wound ETA 7001 movement. It's 100m water resistant and comes with a black leather strap included.

The use of a manual calibre, as well as being historically faithful, allows the watch to be slimmer, even on a NATO strap (which is really how this demands to be worn). At 40mm it's a great diameter, and one very simple reason it has spent so much time on my wrist is that it's comfortable and wears under a work shirt. But those attributes are far from exclusive to the M100.

The watch is on a proper, through-and-through NATO strap, in Admiralty Grey of course
Courtesy

Which brings us onto how this watch fits into the wider landscape. Nothing exists in a vacuum, not even quite handsome field watches with a bit of revival-cred. The watch is priced at £2,500 and - at the time of launch - was being marketed as an invitation-only proposition; Cochrane's plan was to offer the watch for sale to 60 hand-picked individuals, each of whom would then be allowed to refer five more customers. More recently, it's not clear whether he intends to stick to that model - there was talk of offering the watch out on normal sale.

This is probably a good thing: the invitation-only idea might have garnered attention but not universal praise. Working on the assumption that want one, you can get in touch with Vertex and buy one, the question is: should you? Rafts of internet commentators on other sites have been moved to point out that the basic specs of the watch at £2,500 don't compare all that well with either a Longines Heritage COSD, a Hamilton Khaki, a Tudor Ranger or Heritage Black Bay or countless other things. All things being equal, that is true.

But all other things aren't equal. Beauty is subjective but in my opinion this is a more attractive, more appealing watch than the equivalent from Longines or Hamilton. That's a matter of taste because those numerals will either really grow on you - as they did with me - or you will never like them, and if it's the latter then maybe the Longines is for you. I feel like the M100 has more personality because of them. (Another side note: I seriously wonder what they will look like in 30 or 40 years's time, given luminova's natural tendency to degrade. Something I would love to see would be a collaboration with 3D lume-wizard James Thompson, who could mill these out of solid AGT-Ultra, rather than paint).

Against a Tudor, it's a different question again. The Vertex M100 can't triumph on brand name terms, nor (I suspect) on build quality. But for one thing, it's hand-wound, and for some people that's a deal-breaker, but more importantly it's rare. Even leaving aside the invitation-only idea, there are not going to ever be a lot of these in the world. And you only have to look at the enormous popularity of limited editions (and for all the carping, both by journalists and commenters, we hear from retailers that anything limited is guaranteed to sell well) to see why that matters.

Throw in the connection to the Dirty Dozen, the family connection to the original Vertex company, and you have something that I can see making sense to a reasonably large audience - certainly, enough people to justify this watch's existence. Now, what I'm really interested to know is - what does Vertex do next?