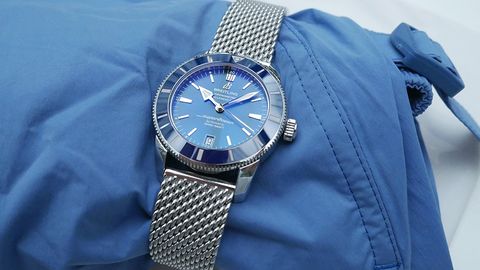 I have long admired the Breitling Superocean Heritage. It has been around quite a bit longer than the current vogue for heritage reissues, and unlike a lot of Breitling watches it is available at a size I could wear (42mm). It has long had the benefit of being slightly forgotten - the limelight having been on pilot's watches for the last few years, fairly enough, after all they are core to the brand's existence in a way that a middle-of-the-road dive watch is not.

It was also for a long while one of the entry-routes to (mechanical) Breitling, something I could conceivably purchase. Since Breitling began the process of in-house movement production in 2004, the Navitimer, which remains unarguably the jewel in the brand's crown, has been firmly out of reach. Today it will set you back £6,950; acceptable value for an in-house chronograph with impeccable pedigree, but still a price beyond many people.

So, personal interest declared, on to this year's Superocean Heritage II (the sequel!). This year marks the 60th anniversary of the Superocean, Breitling being among the small number of watchmakers to have succeeded in the late 1950s in releasing a dive watch that stood the test of time - alongside Blancpain, Omega and Rolex. But we're not hearing an awful lot about the Superocean's history this year - perhaps because this watch made the headlines when it was released for different reasons.

It is the less-talked about end of the swap deal for movements between Tudor and Breitling that saw Tudor gain a chronograph calibre and Breitling reduce (perhaps even totally eliminate; the extent of the deal is unknown) its dependence on ETA calibres. So what's inside this watch, while it may be referred to by Breitling as the "in-house" calibre B20, is a lightly re-skinned version of Tudor's MT5612, with an impressive 70-hour power reserve. Breitling re-finishes the movement in a more traditional style, does away with Tudor's silicon hairspring and regulates the escapement to COSC standards of accuracy, but it is in all other respects the same calibre. In-house? Well, in somebody's house, sure.

In all other respects, the Superocean Heritage II is the same as its predecessor. It's still a 42mm dive watch, good for 200m of water resistance. If you were playing spot the difference, from the outside the only giveaway is the migration of the date window from 3 o'clock to 6 o'clock. I'm not entirely sure why this is, as Tudor uses the same movement with the date at 3; perhaps Breitling felt it worked better at six in the absence of the Black Bay's big lume plots. Otherwise... it feels like maybe the dial text has got a bit larger, but that could be an illusion.

On the wrist, I feel there are elements that succeed and elements that are a matter of taste. The polished case is very shiny - some may prefer a more utilitarian brushed finish on a diver - and the watch is pretty chunky at 14.34mm, although not in a way that feels over the top. The general fit and finish is very hard to fault; the bezel has a solid click although there is a little bit of play in its movement. One thing that does irk me is the bezel's finishing - run a finger around it and you'll notice that the hour markers don't sit entirely flush with the blue ceramic insert, something that would have only taken a thin layer of lacquer (for example) to rectify.

My main issue with the watch as tested was the colour. The press images tell a tale of a rich, deep royal blue on both dial and bezel - the reality I found was much less vivid. It's not a criticism of the watch per se - the precise shade of blue you like best is entirely subjective - but the marketing materials are definitely writing cheques that the watch does not cash. Even our own unedited pictures bring out a shade of blue in the watch that, wearing it daily, I rarely saw.

The mesh bracelet feels hugely comfortable and balances the weight of the watch well on the wrist, and the folding clasp is one of the most solid on the market. Legibility is good, thanks to those vintage style hands, but I would generally prefer more lume on a diver, even a retro-inspired one. There are discreet dots atop each hour marker but the overall message is that the watch isn't so rugged - which I think is unfair given the actual robustness of its construction. On the plus side, this does mean the Superocean Heritage has its own look rather than something that's forever in the Submariner's debt.

Speaking of which, for the release of the SH II Breitling has removed the green bezel variant from the range, leaving black, blue and a reddish brown, allegedly because the green was a bit too similar to the "Hulk" Submariner. You can still pick and mix straps and light or dark dials, but there is less choice for each bezel colour. This is a good thing for overall tastefulness (the old watch allowed for some ghastly combinations).

This raises some interesting questions in terms of context and competition. On the one hand, it is hard to find a solid dive watch with these specs from a brand with Breitling's cachet for less than £4,000 - none of Omega, IWC, Panerai, Rolex can come to your aid there, although a base Luminor is close at £4,000 exactly on a leather strap. You can have a Bremont Supermarine for £3,990 but while eminently capable it's not really a watch that answers the same questions.

No, the Breitling Superocean Heritage II's biggest problem is the watch it shares a basic movement with. Tudor's Heritage Black Bay matches the Superocean for depth and spec (200m, 42mm, COSC certification, plus the slight gain in magnetic resistance from the silicon hairspring) and beats it on retro cool and price (£2,580 on a steel bracelet). You can argue the toss in terms of brand desirability - Tudor may not have the illustrious past or an established in-house chronograph, but for me, there isn't as much in it as there used to be.

Personally, I'm forced to admit that I like the idea of the watch more than I like the watch itself. A movement upgrade is nothing to be sniffed at - we lambast brands for endless colour revisions while the technical innards remain unchanged, so it would be a touch hypocritical to slate Breitling for doing the opposite - but I do find myself questioning how much the typical customer for this watch will care about the calibre inside as long as it meets basic standards, especially when you can't look at the movement. You are effectively paying an extra £400 or so for a bigger power reserve; justifiable if a brand has invested in developing its own movement to improve on a predecessor, but when the heavy lifting has been done by Tudor... you tell me.

This is a well-built watch from a major brand, with a good quality movement and looks that tread the right path between mainstream and fashionable. It hasn't won my heart, but I'm sure it will find favour with many.