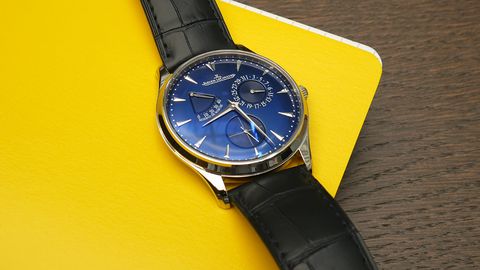 As full-time observers of the watch industry and the products it produces, it very often falls to us journalists to speculate about "trends". Certain ideas seem to pass through the watch world like waves, some quicker than others. Right now, we are in the middle of a fairly large wave of nostalgia for the 1960s and 1970s which has carried with it shorter, smaller, spikes - all the orange, or brown, watches seem to appear at the same time, for example.

There is also a longer-term trend towards a diversification of the materials one might make a watch out of; and if you zoom out further still, looking at men's watches over many decades, we have seen watches become generally bigger. Notwithstanding a modest correction in the last two years (which is more about remembering some people still want 38mm-41mm watches), that continues. With a few exceptions - Rolex; Patek Philippe - the brands that are at least in touch with these trends generally seem to be the more successful.

The reason I bring this up in the context of the Jaeger-LeCoultre Master Ultra Thin Power Reserve is that it is a long way from any of these trends. Certainly it is in no danger of being called "trendy", either. It does have a blue dial, which is something of a recent thing for the entire industry (and which we will get into in more detail on in a minute) but that's about it. In general, Jaeger-LeCoultre has been caught flat-footed by recent developments in men's watches; there was little at SIHH 2017 to truly get the pulse racing beyond these quite nice new entry-level pieces. Rumour has it business is not sensational, and we will see something at SIHH 2018 that puts the spring back in its step.

But in the meantime, rather than talk about the watches Jaeger-LeCoultre isn't making, let's look at what it is. This new Master Ultra Thin Power Reserve wasn't shown to all press at SIHH - almost as if it didn't seem worth talking about. After all, this isn't a wholly new watch - it's just a new blue dial. But what a difference it makes. I've not met a single person so far with a bad word to say about it.

The basics are simple enough. It's a 39mm steel-cased watch with Jaeger-LeCoultre's in-house calibre 938/1 inside. It's got a single barrel giving 40 hours of juice, beating at 28,800vph. Based on the previous caliber 889, it has been around for a long time - getting on for 20 years, as has the watch it's powering. Jaeger-LeCoultre puts it through its own Master Control testing, a 1000-hour process aimed at guaranteeing accuracy and durability (although no specific benchmarks are published by the brand).

Personally, it's not something I would have expected to love. I don't typically go for asymmetric dial designs, radial calendar displays or power reserves on automatic watches. But all that is out of the window because this is one stunning blue dial. I mean, it is fabulous - deep, rich, and shimmering. It's not even grand feu enamel - just a simple lacquer. It looks fantastic, especially next to the perfectly sharp dauphine hands and hour markers.

What else is there to say? At 39mm it's a real sweet spot in terms of size. The case is a fraction under 10mm thick (9.85mm to be exact) which is spot on for daily office wear. I will say that time has moved on since Jaeger-LeCoultre first christened this range of watches "Ultra Thin" and in the days where the all out record for thin watches is 3.85mm - also held by Jaeger-LeCoultre - it feels like "Ultra Thin" is a bit strong. My Nomos Orion is thinner.

So yes, this is essentially a review of a dial. And I'm perfectly ok with that. Dials can transform a watch - you're going to look at them dozens of times a day, and a bad one will get under your skin in seconds. This one did the opposite - it worked its way into my heart.

What to make of all this? It's an enormously easy watch to love, something you could wear to work day-in, day-out until you retire. But as explained, this is fundamentally an old design with a very appealing new gloss; and for all that there is an element of "if it ain't broke, don't fix it" about the watch itself the sales figures don't lie. If modern-day Jaeger-LeCoultre isn't going to have a future selling watches like this, what does that mean for fans of the brand?