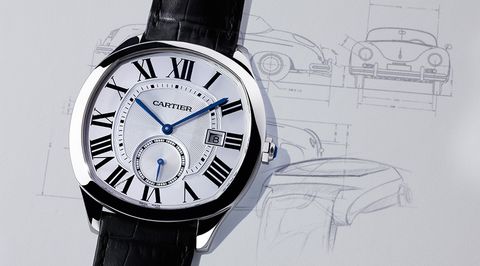 Be that as it may, Cartier thinks you’re going to like the new Drive de Cartier and, frankly, it will be a fathomless mystery if you don’t. But then again, people didn’t seem to go for last year’s Clé de Cartier and that was one of the most sophisticated wristwatch cases ever designed – according to some at Cartier, the market has found it too feminine.

Having launched both men’s and women’s versions of the Clé together, both in precious metals, Cartier resisted bringing out a steel version throughout 2015 – we finally did see one, on a handsome bracelet, at SIHH this year.

But it is no great leap of the imagination to assume Cartier has decided that there was still a need for something more overtly masculine in both form and name, and it delivered it in the shape of the Drive, which launched in steel straight off the bat, and in a clutch of different versions too.

Having said that, the space for it is hardly generous, given the existence of Calibre, Dive and Rotonde de Cartier on one side and the traditionally masculine shapes such as the Tortue and Santos 100 on the other. You might wonder quite why Cartier needs to fill such a precise niche at all, when it already has such an extensive collection; and the answer seems to be that it doesn’t really.

Drive de Cartier isn’t going to be the brand’s top-seller, front and centre of every window or display. It won’t be as versatile as, for example, Ballon Bleu, which sells more than many quite large brands. And it’s that sense of Drive de Cartier being aimed away from mass sales that makes it so interesting (though don’t forget that Cartier’s scale is of quite a different order to the likes of IWC or Jaeger-LeCoultre).

But whatever the marketing rationale behind the launch, Drive de Cartier rewards attention – there is so much detail to the watch.

Cartier talks of the design deriving from vintage cars, though it’s hard to think of a single automotive era that could have spawned the watch; and in purely watch terms it is even harder to pin down – the cushion base to the shape suggests the 1940s, but you could equally argue that there’s a little ‘70s Genta feeling going on too.

There’s more previous form to Cartier’s interest in matters automotive than you might think, quite apart from the DB5 belonging to Cartier London’s recently-retired chief, Arnaud Bamberger (last seen on Bond Street loaded with Champagne for a retirement soirée).

At a stretch you can trace the interest right back to the Renault tanks that inspired Louis Cartier’s original Tank watch in 1917, but more concretely, the maison can point to its long-running support of the Style et Luxe concours at Goodwood’s Festival of Speed, a very Cartier evocation of automotive form and character that has been a vintage showcase for everything from Bugattis to beach buggies.

There’s also the Roadster, a somewhat polarising design from the early 2000s (though only recently out of the catalogue), which derived its look directly from the high-watermark of Detroit Americana.

Seemingly, you can pin down details to particular sources: the guilloché derived from radiator grilles, the wheel arches that are recalled by the dial plan or the crown that is both radiator cap and engine bolt. More elusively, the combination of curves and soft angles has something of late ‘60s and early ‘70s sports car design to it: think Ghibli and Miura, but with a dash of Aston Martin’s more muscular DBS. And it’s the geometry that makes the Drive de Cartier work: the watch curves perfectly over the wrist and looks larger than it really is, thanks to the vaguely octagonal dial.

The space on the dial gives more prominence to the very angular Cartier roman numerals and sword hands. The tension this sets up is what caught my attention most immediately, particularly with the simplest of the three movements the watch was launched with – a small-seconds based on Cartier’s in-house base calibre, the 1904 MC. My feeling, though , is that the more complicated dials of the other two versions were ultimately more successful.

All three are Cartier-made movements produced at the manufacture in La Chaux-de-Fonds – the 1904 MC was created in 2010, one of the first to emerge from the facility. The second watch has the calibre 1904-FU MC, created in 2014, which combines an unusual retrograde second time zone display, a day/night indicator, large date and small seconds, all controlled from the crown.

There is also a flying tourbillon version which uses the hand-wound 9452 MC. These are assembled and set in the workshops above Cartier’s Rue du Rhône boutique so as to qualify for the Poinçon de Genève.

All together, Drive de Cartier hits the spot in a most unexpected way: it takes elements and codes from the past but without ever seeming obviously retro; it fills a niche that wasn’t obviously there; and it earns rather effortlessly the acclaim it is rightly receiving.