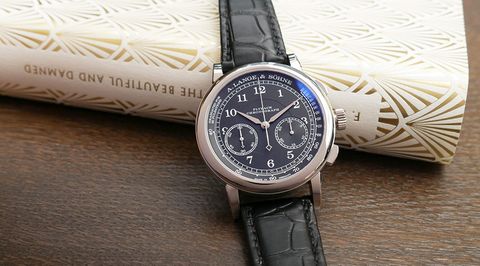 You already know how we feel about chronographs from A. Lange & Sohne. The Datograph Perpetual is a glorious thing - and we aren't the only ones who think so; when we asked Kari Voutilainen for his opinion he had nothing but praise for the movement within. Elsewhere, whether it's a grand complication like this year's Tourbograph or a simple 1815 boutique edition, A. Lange & Sohne rarely puts a foot wrong when it comes to chronographs.

And now this - an updated 1815 in white gold with a black dial that just might be the ultimate purist's chrono. The mother of all sweet spots. And a really compelling rival to the Patek Philippe 5170 (especially considering the 5170G has been discontinued; there may be a few still on the market but Patek is now only producing the 5170 in rose gold or with a platinum case with diamond hour markers).

The Patek Philippe 5170G, seen here with a Datograph Perpetual, Chopard LUC 1963 and Breguet 5287, is no longer available
Courtesy

Reading down this watch's list of specifications, it is as though it was designed from a watch lover's wish list. 39.5mm in diameter and only 11mm thick. No date window - because as much as we admire the Datograph, the #nodate fanbase remains strong. White gold case and a black dial, with that utterly fantastic movement inside. What's not to like?

On the dial, we get a pulsometer scale, graded from 40 to 200 beats, which adds character and just enough extra text without cluttering things up. On that note, the positioning of the brand's logo around the rehaut allows more space in the centre of the dial for the simple words "Flyback Chronograph". The subdials are in typical Lange fashion oriented well below the half-way point, but that's no problem at all. The hands are rhodium-plated gold.

The calibre inside is the hand-wound in-house L951.5 - unchanged from previous 1815 chronographs since it was introduced in 2010. It beats at a leisurely 2.5Hz and when fully wound, will run for 60 hours. Beyond that, it is one of the most beautiful things in the watchmaking world and shows a true understanding of the combination of depth, contrast and finishing that is the hallmark of any top-tier movement.

On the wrist, it is outstandingly comfortable. Weighty without being clunkingly heavy; not too big nor too small, and easily able to slide under a shirt cuff. It's flawlessly smart and would look sensational with a suit, but you could also dress it down and go quite incognito. White metals do have that advantage. Needless to say operating the chronograph itself is as smooth and surgical as A. Lange & Sohne chronographs always are.

There is not a lot more to say, in all honesty: this new model doesn't replace any existing pieces and nor is it limited in number. It will cost £40,300 which is in the context, a bargain. Yes, really - because you simply cannot buy a manual flyback chronograph that looks this good, with this level of quality inside and out, from anyone else for less than £50,000.

Let's just look at that movement one more time, shall we?