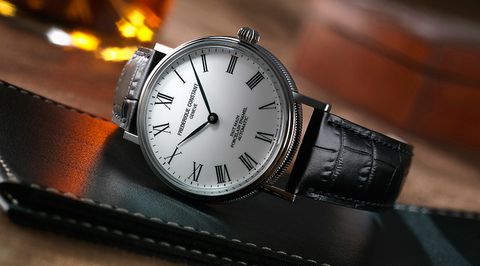 Limited editions tend to be showy, expensive affairs when it comes to watches, and why not? It’s usually a chance for the watchmakers to go a little crazy, stretch their horological legs and show the buying public what they can really do without such petty constraints as affordability.

So what do you do if you want to create a numbered exclusive but you’re Frédérique Constant – a brand known for its classic designs and unthreatening price tag? You go to a porcelain factory, of course.

The Frédérique Constant Classics Art of Porcelain was actually the result of a trip organised by the brand’s distributor in Hungary. Peter Stas, the brand’s CEO, was out in Hungary, where the distributor insisted he take a tour around the Zsolnay Porcelain factory, which was established in 1853 and a bit of a legendary institution in Hungary.

Stas was so taken with what he saw at the factory that he commissioned Zsolnay to handmake porcelain dials for 188 watches. Although the appearance is akin to enamel - and it does say "porcelain enamel" on the dial - this really is such stuff as tea cups are made of.

The components are heated in a kiln to temperatures between 1,200 and 1,400 °C (2,200 and 2,600 °F). These temperatures cause vitrification and the formation of the mineral mullite, which gives porcelain its toughness, strength and translucence. The disc is then sanded by hand and the numerals hand-stamped onto the discs, as the words “fait main” on the dial indicate.

It is the essence of restrained design – there isn’t even a sweep second hand to show that you’re wearing an automatic, though the sapphire case back would reveal it to be the FC-302, which isn't in-house; something that contributes enormously to the sub-£2,000 price tag (the watch comes in at £1,840).

The porcelain dial has a subtle luminescence, much less so than enamel, while the slightly raised numerals look as though they’ve been hand-painted on, making it all feel like a throwback to the chronometers of the 18th century. However, with its onion crown, slim, steel case and black alligator strap, this is undoubtedly a dress watch. Some purists would no doubt argue that, at 40mm, it is on the large side for a dress watch but long gone are the days when, for men, “dress” meant sub-38mm and it certainly sits very elegantly under a shirt cuff.

Despite being an incredibly simple watch, it has its fans. It was snapped up by Harrods when its watch buying team saw it at this year’s Baselworld and is on sale there exclusively to coincide with the Made with Love and Precision watch exhibition, which runs until the end of August.

This Classics Art of Porcelain may not be a watch that clamours for your attention, but, like many of Frederique Constant’s watches, it subtly whispers in your ear until you cannot help but be seduced.