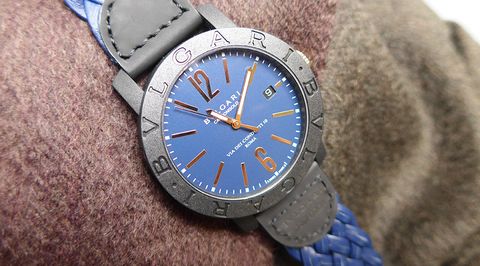 The Bulgari Bulgari Carbon Gold is a watch awash with contradictions. It’s a design classic (created in 1977 by the one and only Gerald Genta) but it looks like a brand tie-in from the 1980s; it looks and feels insubstantial but is made from an alloy that mixes carbon fibre with gold. It looks really simple but in fact has much more to it than first glances would perceive, and it's stronger than a watch this stylish has any right to be.

Take, for example, the buckle – it looks plastic, cheap even, but it is actually made from polyether-ether-ketone or PEEK – an incredibly robust polymer used in the automotive and aeronautic industries.

It’s like the “Bulgari Bulgari” adorned bezel. These days, to the jaundiced eye of the over-exposed luxury consumer, it can feel like a cynical add-on devised by the marketing department in order to draw in the label-hungry, but it was part of Genta’s original design.

That design hasn’t really changed much since the 1977 original, beyond the case now being made from carbon gold. To create this lightweight material, high-tech carbon-resin composite exclusive to Bulgari is allied with gold, something it developed back in 1993 for the launch of the first watch to bear the name.

This year’s outing ups the Italian Riviera vibes by adding a woven strap in either blue or black, which, in itself, is a nod to the woven hemp and leather straps that were offered to the brand’s VIP owners of the digital Bulgari Roma back in 1975.

Only 100 were lucky enough to receive this strap, which turned it into a collector’s classic. On the wrist it's super-comfortable, although as you can see above, the rustic nature of the weave means the pin struggles to align perfectly with the buckle. This may or may not bother you...

There's no denying it's a style statement, however. This new all-leather version is reminiscent of those sandals you see Italian men wearing with shorts that look so cool pounding the cobbles of a piazza, but rather less so when contrasted with the grey, chewing-gum flecked pavements of Oxford Street.

Which is the general feeling about this watch. With its emblazoned bezel, rich blue dial with slightly flashy gold hour markers and rather louche-looking strap, it is the horological equivalent of a Versace shirt – knowingly Italian, perfect for hot climes but not necessarily every man could pull it off.

If you think you do have the chutzpah, then it is a great piece to add to any collection. Thanks to the movement not being in-house – the B77 is an ETA 2892 with a branded rotor – it won’t stretch the wallet too much but for under £3,000 you are buying a piece of design history, and heaps more character than much else that's around at the price. When you consider that other Genta watches include the Audemars Piguet Royal Oak or Patek Philippe’s Nautilus, this is a relative bargain, and even if those touchpoints feel too far removed when it's had the carbon and blue leather treatment, it's still a well-designed watch that rewards greater inspection.

Take, for example, the curvature of the case, bezel and sapphire. It's a complex shape that belies the attention to detail of Genta's original design, and Bulgari's modern-day execution of the same.

In fact, the basic design roots help prevent it veering into gimmicky territory - this combination of colour and materials could, in the wrong hands, feel very insubstantial. Instead, it's fun without being frivolous.

With Summer seemingly upon us and the linen shirts finally being dragged out from the back of the wardrobe, the Bulgari Bulgari feels like the ideal watch to wear now to inject a slice of Italian cool into your wardrobe. Undo a button on that shirt and embrace the Mediterranean look. Just keep the wolf-whistling to a minimum…