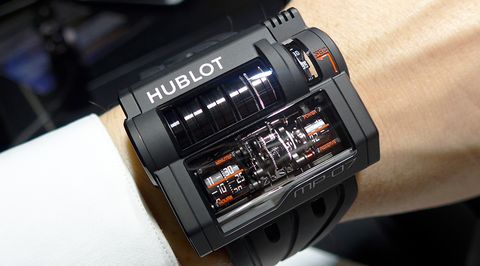 After a period of heady experimentation a few years ago with high-frequency escapements, the watch world entered a period characterised by advancements in more “user-friendly” (not to mention lower-maintenance) areas of movement design.

One of the big changes has been in power reserve lengths. If you’re a manufacture brand, it is now expected that you’ll be offering at least 60 hours on basic tractor calibres. And it’s no longer the sole preserve of IWC to offer seven- or eight-day lifespans.

It’s against this background that we look at watches like Hublot’s MP series. Alongside pieces from Parmigiani, A. Lange & Sohne, Vacheron Constantin and others, they have been part of a new vanguard, one that has introduced power reserves counted in days and weeks, not hours.

How do you increase the running time of a movement? You can maximise efficiency throughout the gear train and escapement, saving weight and minimising friction, introducing new materials and ensuring the transmission of power has as few stages as possible. You can also buy bigger and better mainsprings, increasing the size of your barrel – and therefore your watch.

Doing this brings gains, for sure, whether you're talking about Tissot's Powermatic 80, Rolex's new calibre 3255 or Zenith's Elite 6150. But it’s painstaking, can involve overhauling the entire calibre, and there are limits to how much you can grow that power reserve within the confines of a "normal" movement. (Of course, having a super-efficient gear train is also desirable from the perspective of accuracy, and service intervals).

But this is all so much like aerodynamic tweaks to a supercar. If you are in the business of setting records, you need to add power, in the form of a big, powerful engine. Perhaps it’s no coincidence Parmigiani and Hublot chose Bugatti and Ferrari for their partnerships on long-running watches.

Just as mid-level brands have gone from single-barrelled to double-barrelled calibres for their power increases, Hublot has been stacking up mainsprings like blades on a safety razor.

So the MP-07 uses a total of nine series-linked barrels to provide its 42 days of power. That’s right, one day for every hour in a bog-standard ETA. It's wrong to think of this as brute force watchmaking, though: the calibre (HUB9007.H1.PN, in case you were wondering) also contains a vertically-mounted tourbillon, beating at a moderate 3 Hz, and a total of 487 parts.

But walking around with the power reserve of a table clock in your watch brings a few, shall we say, knock-on consequences. To invoke another automotive analogy, it reminds me slightly of hot-rods so extremely modded that the supercharger blower protrudes so far through the bonnet that you can’t see where you’re going.

Similarly, lining up nine barrels in a row does something for your ability to display the time. In the MP-07, hours, minutes and seconds are read off two revolving cylinders – matched by another that displays the remaining power. The cylindrical indexes combined with the visible barrels give the whole thing a coherent, high-tech look, but at-a-glance it ain’t.

Furthermore, the immense amount of torque required to input six weeks worth of winding to a watch means that the MP-07 departs from anything so mundane as a crown, instead shipping with a winding cradle about the size of a passport and a motorised pen with which to wind the watch. The fact that you only need to do it eight or nine times a year makes this less of a chore, in fairness.

Last but not least, the sheer bulk of the movement means the overall watch is a bit of a beast. It looks like the kind of wrist-computer you’d see in a sci-fi movie; perhaps an early prototype of a Star Trek transporter. I actually find it preferable to the LaFerrari cobra-head shape, which is so big on the wrist as to be practically unwearable, but at 52mm by 43mm by 24mm, the MP-07 is pretty hefty. The way the strap tapers in does help settle it on the wrist, a bit.

But of course in all these small criticisms we are actually arriving at the whole essence of the watch. It’s not a daily wearer with a bit more running time than its rival; it’s a technical showpiece, something whose potential you admire and respect rather than actually exhaust. You like that it’s big – how else are people going to notice it? The techy case shape, sci-fi typeface and exposed cylinders do have a consistency of design that’s arguably more complete than that of similar timepieces – in fact, it could even be considered understated next to some others.

My only genuine niggle with the watch is its trump card. 42 days of power isn’t an outright record – it’s outgunned by the older LaFerrari MP-05 with its 11 barrels and 50 days, although I'm pretty sure it's coming in second place (narrowly ahead of the Rebellion T-1000, which runs for 41 days). That may sound reductive, but there is a distinct element of one-upmanship in the high-end game. On the other hand, it's easier to love than the LaFerrari, mildly easier to wear, and at £191,000, cheaper too. Mind you, most customers will probably have both...