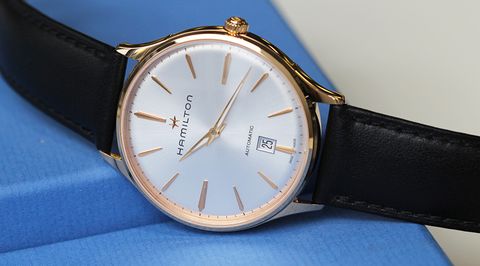 This is the Hamilton Jazzmaster Thinline Gold, unveiled at Baselworld this year. It is the flagship model (purely in terms of price, at least) of the Jazzmaster collection, a disparate family of watches that includes quartz chronographs, production-line skeleton movements, smart GMT and day-date models, and the downright odd Face 2 Face II, Hamilton's bulbous, swivel-cased chronograph.

So the fact that it's a Jazzmaster tells us very little about the watch. It's not a collection with any sense of identity, and - I suspect - for many the name is as likely to bring to mind a Fender guitar as a watch.

The rest of the name is a bit more helpful, however. "Thinline" conjures up vague notions of slimness, elegance and minimalism, and "Gold" - well, yes, it is. 18kt rose gold case and pin buckle, which is what accounts for the price: £4,100 (CHF 5195). So this is top-end Hamilton; what does that mean?

It means we get applied indexes, which are nicely shaped, and at 12, 3, 6 and 9 have two layers to them. We get a silver sunburst dial and sharp dauphine hands. It's all very 1950s, which is to say it's very much on trend. There's a discreet minute track, just visible as the domed dial curves away at the edges.

The date window at 6 o'clock is one of those things some would prefer not to have; it's pretty much something we all have to make our peace with, however. Whether you view it as useful or a blemish comes down to how you see this watch: is it an elegant daily wearer, a good match for any business suit? Or is it an actual dress watch, coming out on infrequent occasions? Ultimately, that's down to you. Details like the luminova on the hands arguably make the watch more workaday, but also add to its usefulness.

It's definitely a very wearable piece. Hamilton doesn't actually divulge the case thickness, despite the name, but it's pretty svelte, and at 40mm a well-balanced size. Beyond the 18.5 grams of rose gold, however, and the admittedly smart dial, there's not a lot more Hamilton has done to convince us this is a four grand watch. The leather strap felt cheap and shiny, and inside the watch is a bog-standard ETA 2892-2 - better than a 2824, but still a regular tractor calibre.

The logo, too, lacks sophistication. It takes up a lot of space on that dial and isn't particularly in-keeping with the heritage vibe given off by the rest of the package. Could we not have had the space-age cool version seen on the Intra-Matic? At this price, details start to matter a lot more.

But we're not writing this watch off. While it's true most people's first reaction will be "a £4,000 watch from Hamilton?", perhaps it's best to think of it as an affordable gold watch. If you're shopping for a gold, time-only watch for around the £5,000 mark, it's not a particularly crowded market. The first piece we thought of in this category was the TAG Heuer Calibre 7 Glassbox, which has effectively the same movement, better retro appeal and brand value (and a seconds hand). But that comes in at £6,400, 50% higher than the Hamilton, and it's slightly sportier too.

Frederique Constant - that bastion of well-priced watches - has a slimline automatic with an in-house movement that's also 40mm, two hands with a date. It's a bit more mature in its styling - verging on unexciting - but it ticks the boxes for just CHF 3,990. If you fancy something a bit better looking from FC, you've got to go up to this model, with more minimal hour markers and feuille hands. But that's CHF 8,290.

Montblanc has perhaps the most compelling alternative: the Heritage Spirit Date Automatic. Dauphine hands? Check. Date? Check. Silvered sunburst dial? Check - and the graining looks nicer, too. There's more gold in the mix - a whole 26.5g - but it does cost a thousand pounds more than the Jazzmaster, coming in at £5,100.

Perhaps Hamilton is onto something here after all. Especially as it wasn't the only brand we saw at Baselworld with a similar offering - both Louis Erard and Ball Watch are also releasing 18kt gold time-only watches - and both cost less than £6,000 (but more than the Hamilton). If you've got a burning desire for a (new) gold watch, a strict budget of £5,000, and can shell out for a new strap, it's definitely worth a look. The watch is being produced in a "limited" edition of 1892 pieces - marking the year of Hamilton's founding.