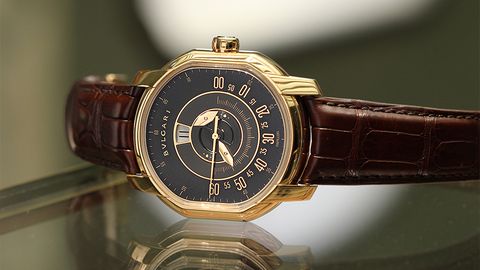 Roman decadence has exploded onto Bond Street in time for the summer, in the form of Bulgari’s palatial boutique, newly refurbished by architect Peter Marino to fabulously swanky effect. Should you have a thing for lavishly beautiful interiors – we’re talking acres of fine coloured marble, stupendous mid-century Italian furniture, magnificent chandeliers and one of the fanciest staircases in London – then head on in.

Amid all the marble and jewellery (of course), there's an inner sanctum dedicated to fine watches, including some pretty extravagant and remarkable pieces, including high repeater complications and the unbelievably slim "Finissimo" Octos and Bulgari Bulgaris.

What took our fancy on a recent visit, however, was the redesigned Papillon Heuer Sautante, a signature invention of the watchmaker Daniel Roth which Bulgari inherited – along with a wealth of technical capability and forceful designs – when it acquired the Roth and Gerald Genta brands from their Singapore-based owner almost 16 years ago. There are two new versions, in rose gold and in steel.

The papillon takes its name from the look of the two lozenge-shaped hands sitting on a central disc – Roth found they reminded him of a pair of butterflies at rest. In conjunction with a jumping hour display at 12 o’clock, these indicators  are a twist on a retrograde minutes display. Normally, a retrograde minute hand arcs across a semi-circular 60-minute track every hour, before flicking back 180 degrees to start over. With the papillon, there are two pointers that sit on a disc that makes a full rotation every two hours, thanks to a patented system that Roth created as a module upon a base movement.

There have been various papillon editions over the years. Roth's original jumping hours papillon was austere, beautifully finished and rather more Swiss in design and ambience than the Bulgari interpretations that followed it. Roth only made 210 pieces – the one below sold at Antiquorum last year for CHF 8,750 (c. £6,400).

Roth also created an exotic chronograph version, which Bulgari first revived, and in 2012 it introduced a dual time zone version of the original jumping hours called the Voyageur. Both of these designed to the fussy, overcooked aesthetic that defined noughties Bulgari.

However, starting with the Octo collection  in 2012, Bulgari has been introducing a more homogenised, sleek style across its watches, drawn from the traditional Bulgari Bulgari dial look. The Daniel Roth watches have been  the last bastion of the outré old style, but a rethink started with last year’s L’Ammiraglio Del Tempo minute repeater, which introduced a more subtle case design – a more elegant template that’s also been applied here. Meanwhile, rather than the feast of contrasting dial sections found in other Daniel Roth models, the handsome gold-on-black aesthetic of the new Octo and Bulgari Bulgari lines now takes its place in the Daniel Roth collection.

Crucially, rather than the ETA base that Roth used, the Papillon Heuer Sautante now exists on Bulgari's own "Solo Tempo" in-house movement, made at its manufacture La Chaux-de-Fonds, which comes with a 42-hour power reserve.

On first encounter, the Papillon might seem a complicated, fussy thing to wear and difficult to read, but the opposite is true. We borrowed one for a few days, and it didn't take long to get used to the display, as with any other jumping hours watch. And at 45mm, while the watch might seem hefty, the contours of that unusual case – including a raised "glassbox" crystal, something that always seems to have a slimming effect on a wide watch – make it surprisingly wearable and streamlined.

For those who want something truly extravagant – something fitting, say, for the absurdly lavish environment of the Bulgari boutique itself – the brand last year also launched the first papillon with a tourbillon, which was centrally mounted in the heart of the dial. That's an impressive watch, but the Heuer Sautante impresses in its own right too.

There'll be plenty who still invoke the legacy of Mr Roth himself and those few, beautiful papillon watches he made himself. But that was 16 years ago. For now, Bulgari's new look for a long-rested watch highly unusual method of timekeeping is a pleasing step forwards, and a welcome move away from the crazy designs of not so long ago. For that kind of ostentation, you still have the shop itself though.